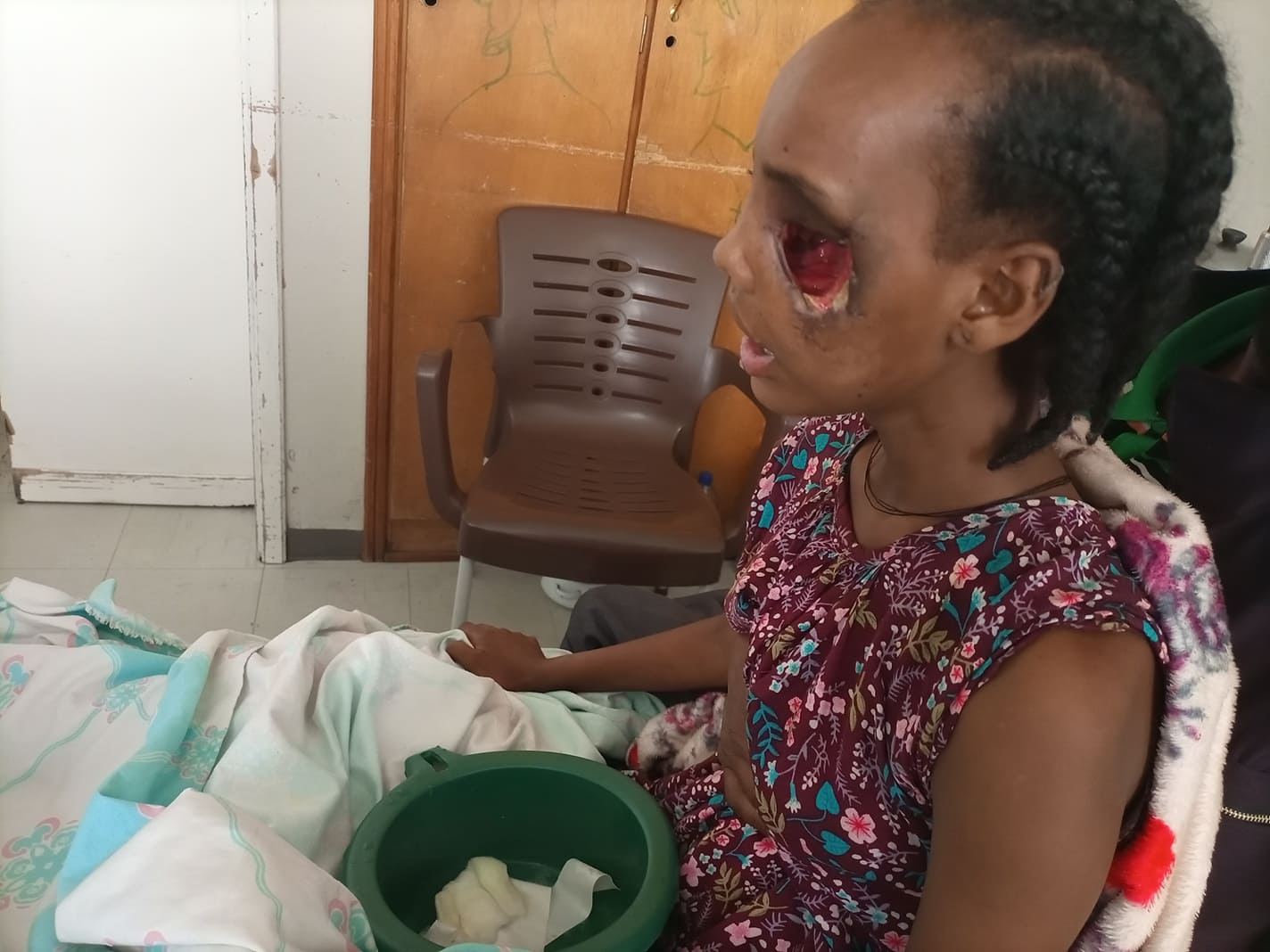 Beriha Gebray was shot by an Eritrean soldier. She lost her two eyes.

Beriha Gebray (15), the eldest of five children of the Gebray family, is an 8th grade student. The Gebray family lived in Mai Tekli (Samre), southern Tigray. Since Mai Tekli is on the side of the road to Mekelle, it is repeatedly attacked by the invading forces that pass through it. On 8 February 2021, the family decided it was too dangerous to stay there, left their house and fled to Gebray’s elderly family who live in Tiyan, Amdi Weyane, an area away from the road.

On 20 March 2021, the family decided to return to their house at Mai Tekli, leaving Beriha behind. Beriha remained there assuming it was still safer there and also to take care of the elderly grandparents.

On 24 March 2021, around 15:00, Beriha and her aunt with her two children (a boy and a girl) were in the house when Eritrean troops came to the area and started firing at houses. Beriha, her aunt and her two children decided to flee from the house to a direction away from where it was being fired. The four were trying to hide when another Eritrean soldier from a direction they did not expect fired at them hitting the boy. The boy fell, and when Beriha tried to pick him up, the soldier fired at her hitting her on her right face. The bullet passed through her eyeballs and destroyed them.

Beriha fell too and the aunt and her daughter ran away. Beriha and the boy were lying there until the soldiers left the area and people could come to see them. Beriha’s father, Gebray heard the news at night and he ran to Tiyan. He arrived there around 8 PM. With others helping him, they carried Beriha from who blood was flowing for five hours to a place called HareQo where they thought they can find a clinic. From there, they were referred to Adi Gudem and from Adi Gudem to Mekelle’s Ayder Referral Hospital. They reached Mekelle on 26 March, around 13 PM. Since there was no transport, Gebray had to pay 4000 Birr (close to 100 USD) for contracted cars for a journey from Hareqo to Mekelle, which normally costs less than less than 2 USD.

The boy sustained injury to his right thigh and and left ankle but he could not yet go to any clinic for fear that him and his family will be found and killed by the invading forces that target young men.

The Gebray family are now half in Mekelle caring for Beriha, and the rest hiding in Tiyan, Amdi Weyane. Beriha now repeats to her father who had asked her to go along with them to Mai Tekli, “if I had just gone with you to Mai Tekli, this would not have happened to me”.

The people in Tiyan, in Amdi Weyane are still scattered across mountains and valleys. Families are separated, and hungry. But so too are the people in the broader Samre and surrounding areas. In those areas, war is still raging, and looting and massacres are routine, said eyewitnesses. Eyewitnesses said there are no people in the villages.