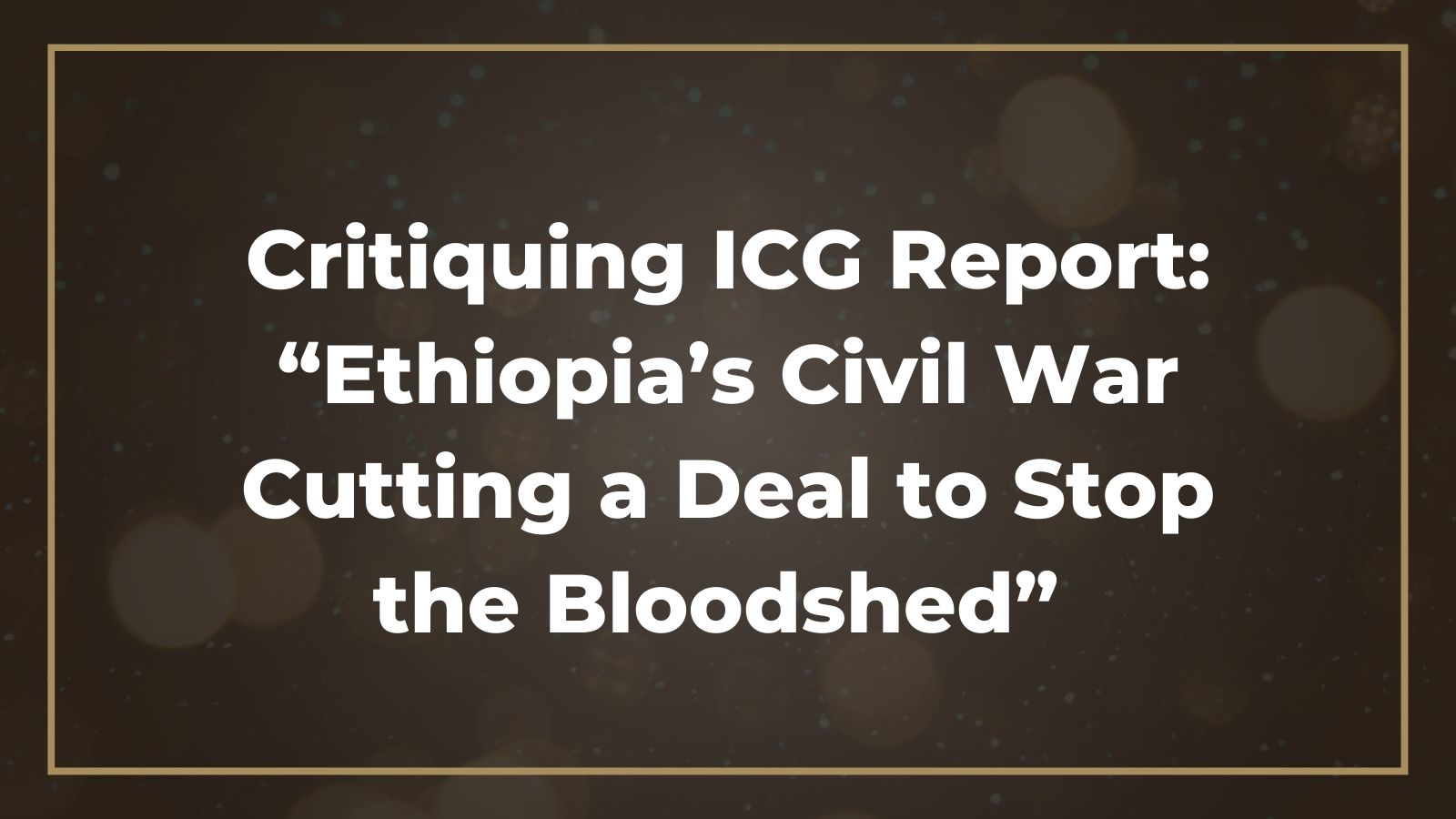 The International Crisis Group (ICG) published a report on Oct 26, 2021, titled “Ethiopia’s Civil War: Cutting a Deal to Stop the Bloodshed” which outlines potential mechanisms for resolving the conflict in Ethiopia. I begin by expressing appreciation to any person or institution seeking to resolve the current crisis that has left tens of thousands dead and millions at risk of dying from a man-made famine in Tigray. Each and every Tigrayan has deeply suffered the trauma of the last 12 months amidst a genocide. As such, no one can be more appreciative of good faith efforts to resolve this conflict and achieve sustainable peace. It is with this spirit that I seek to evaluate the ICG report.

The report starts by evaluating the current progress and developments of the conflict and explains why an immediate ceasefire followed by a negotiated settlement is necessary before concluding with suggestions as to what should be done to realize that. The report rightly identifies the situation on the ground in the sense that, without immediate cessation of hostilities, human suffering is set to worsen.

1. The Issue of Western Tigray

The ICG recommends that Western Tigray be demilitarized and be placed under international peacekeepers until a political settlement is found. This recommendation puts Western Tigray up for negotiation. There are multiple problems here. First, the way ICG is approaching the matter is not from a legal, factual, and realistic perspective but rather through the mere sense of brokering a midway deal to the spectrum of claims from both sides.

Legally speaking, Ethiopia still has a constitution, and that constitution recognizes Western Tigray to be within the borders of Tigray. Therefore, Western Tigray should be returned to Tigray without any preconditions after which the Amhara region can raise its claims constitutionally. Factually also, the notion that Western Tigray is historically Amhara land is unfounded. Western Tigray has been part of Tigray for more than a millennium (it is mentioned in the kingdom of Axum) till Menelik (an Amhara king) incorporated it to Gondar as a reward to his daughter who was governor of Gondar during his reign.

In the absence of any legal or factual support, we shouldn’t acknowledge a claim. If we do, then it will further complicate things, as parties to the conflict are likely to try to make endless claims to make the best out of the negotiation. For example, following the logic of the  ICG  approach, the parts of Amhara currently under TDF are equally liable to be up for negotiation should the government of Tigray seek to make such claims.  Meaning, if western Tigray is up for negotiation just because the Amharas claimed it without any legal or factual evidence, it opens the door for Tigray to come up with its own claims to be considered for negotiation.

The second problem with this approach is the fact that such an idea or an action rewards violence and ethnic cleansing. By invading and occupying Western Tigray by force the Amhara government chose conflict and violence for a question that could have been addressed lawfully via the constitution. It then deployed an effective campaign of ethnic cleansing. This is not just a claim, it is a fact corroborated by the international community. It is, for example, to be remembered that Secretary Anthony Blinken testified to this truth in front of the US Congress.  Putting Western Tigray up for negotiation is therefore rewarding the Amhara forces for their violence and ethnic cleansing.

For Tigrayans, Western Tigray is not only our land but also our graveyard. It is part of our land where the brunt of the ongoing genocide continues to be unleashed. It is estimated that more than a million Tigrayans have been displaced, thousands massacred and their bodies piled, burned and some thrown to the Tekeze River. Those that were forced to flee to Sudan and into other parts of Tigray did so without any of their property and were forced to bury their loved ones on their way out. Many women and girls were raped and told that they were being cleansed of their “devilish identity” and being Amharized. Many were rendered infertile in the most brutal ways with their womb burned with iron rods. It is a place where we were massacred for being Tigrayans but our bodies were stolen to be counted as Amhara. Western Tigray is not only a place that we Tigrayans live but it is also a place that will tell our stories and sufferings for generations to come. Losing Western Tigray will not only be losing a geographic area or a place but it will be losing our untold stories, our blood, part of ourselves. It will be unthinkable for us Tigrayans to give up western Tigray. The bottom line is Western Tigray is not for negotiation whatsoever. We will fight for the next hundred years if that is what it takes!

So, what should the solution be in the case of Western Tigray then? Ideally, the just and right thing to do will be to ask the Amhara forces to leave Western Tigray. But that may delay or hamper the process of negotiations. So, the next best thing to do will be to just leave the case for later negotiations between the federal government and the Tigray government assuming that the Eritrean army will leave Tigray completely before negotiations start. Once the Eritrean army leaves Western Tigray, the will and ability of Amhara forces to stay in Western Tigray will be curtailed making the peaceful exit of these forces possible. Moreover, once the federal government sits for talks with the government of Tigray, the political shield that has thus far allowed the Amhara regional leaders to continue occupying the territory unconstitutionally will be removed. It is to be expected that expansionist ambitions on constitutionally established territories of Tigray will be dropped by leaders who will have to negotiate immunity for the unspeakable atrocities they have committed in Western Tigray.

2. Freezing Tigray’s offensive in  exchange for Access to Humanitarian Aid

3. Endorsement of Former President Olusegun Obasanjo to Mediate the Negotiation

The other thing that I believe would be difficult for Tigrayans to accept is the endorsement of former Nigerian president Olusegun Obasanjo by ICG to lead the negotiation efforts. The AU has proven itself to be partial in the Tigray conflict. It is not to be forgotten that AU chairperson Mr Moussa Faki endorsed the genocidal war as legitimate and described Abiy’s actions as “bold moves to save the country’s territorial integrity”.  This position is yet to be withdrawn by the AU or its chairperson. One of the cardinal criteria for a mediator in a negotiation is impartial for the person/entity. This very important criterion is not there for anybody appointed by the AU. It is absurd to think that the Tigray government or Tigrayans, in general, will accept anybody appointed by the AU especially before the AU officially apologizes and withdraws its chairperson’s partial position.

4. The need for Independent International Investigations of Atrocities

In the ICG’s outline and recommendations, one very fundamental aspect has not been addressed; the case of justice for the victims of genocide. Any negotiation efforts that don’t acknowledge the atrocities committed against the people of Tigray are doomed to fail. All parties should agree on the need for an independent international investigation of the atrocities before negotiations can even start. The delusion that the joint investigations carried out by the Ethiopian human rights commission and the UNHRC will suffice, will only hinder any successful negotiation efforts and sustainable peace. The Tigrayan community has resoundingly and categorically rejected the findings of this investigation where a body affiliated to the perpetrator was part of the investigation. As hard as it may be to believe, this investigation was done without even visiting the very places where the worst of atrocities were committed like Axum, Mahbere Dego and Temben. Even in the long run, any determination short of calling the atrocities committed in Tigray a genocide and any justice mechanism that fails to live up to that determination will be a ground for a renewed or continued violence as it is human nature for people to take it upon themselves to seek redress directly when they are denied justice. Not recognizing what has been done to the people of Tigray for what it is, a genocide, and failing to ensure justice accordingly will also be an insult to humanity and even lead to further genocides in the future. So, the ICG should consider recommending an independent international investigation into all the atrocities committed in Tigray.

In summary, when any entity makes recommendations for ways to resolve the Tigray conflict, they should be careful to not complicate the already complex situation. They should stick to legalities, facts, logic, and justice rather than taking just a midway brokering position and trying to satisfy both sides. Recommendations should also be in accordance with international laws and widely accepted humanitarian norms.

About the Author
Dr. Gebremichael G Zeratsion is a resident physician in NY, USA

Famine as a Weapon of War in Tigray