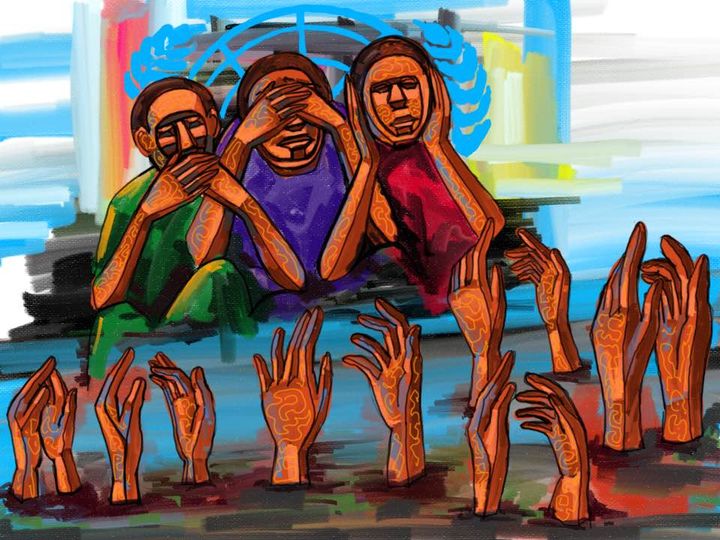 By Saba Mah’derom and Nerea Berhan

More than 200 days into the ongoing war on Tigray the international community has made little meaningful progress to fulfill the communal obligation to protect civilians from what have incontrovertibly been demonstrated to be crimes against humanity and violations of international humanitarian and human right laws. The seeming indifference or inability to take meaningful action by international bodies like the United Nations (UN) and the African Union (AU) which have the mandate to step in where individual governments fail to execute the responsibility to protect has particularly been notable. Sadly, both these bodies have catastrophically failed the millions of Tigrayans that require urgent protection. and Tigrayans – in and out of Tigray – are acutely aware of this.

Different insights, taking into account the set-up and management of these bodies, have been raised to address these costly shortcomings but regardless of the why, what is certain is that the inability of these organizations to act as they are meant to, coupled with the general reluctance of the international community to act has emboldened the perpetrator states to continue violating international humanitarian and human rights laws with total impunity.

As things in Tigray continue to go from bad to worse in every aspect, we want to highlight some of the more egregious examples in which specific international actors have failed to fully carry out their responsibilities with the hope that they can take urgent corrective measures to live up to their mandates.

The mission statement of the UN declares it works to “maintain international peace and security, give humanitarian assistance to those in need, protect human rights and uphold international law”. To this end, the UN has a range of programs and specialized bodies, such as UN Women, UN Human Rights Commission (UNHRC), UN Development Programme(UNDP), World Food Program (WFP), UN Peacekeeping etc.  The sad reality, as it relates to Tigray, however, is that many of these organizations have not only had little to zero engagement but in some instances have actively engaged in decidedly detrimental actions. Let us look a bit more closely at some examples.

UN Women: One of the more horrific aspects of the war on Tigray has been the deployment of sexual violence as a weapon of war on estimated thousands of women. It has been said that, if every genocide or mass atrocity has an identifying characteristic, in Tigray rape that characteristic is most definitely rape. In spite of this credibly established reality, however, UN Women is yet to make the most rudimentary commitment to help tackle this terrible reality either by using its very important platform to raise awareness and to call for accountability or by any other meaningful direct assistance To the contrary, UN Women was inexplicably not a signatory of the joint statement on gender-based violence in Tigray by UN officials. Moreover, the agency’s Ethiopia branch has not only remained firmly disengaged itself from this issue, but its social media platforms have also been unresponsive to requests to reflect the lived reality of all Ethiopian women – including Tigrayan women. In addition, despite the repeated calls from humanitarian actors in the region about resource needs, UN Women only engaged in “delivery of clothing essentials” near the end of April, more than 5 months after the war began.

At a time when women in Tigray need empowerment and solidarity – even the bare minimum of acknowledgment of their –  testimonies on weaponized rape, UN Women has chosen to be silent about the matter.

UN Human Rights Commission: To its credit and very importantly the UNHRC  took an early lead to raise the alarm on the alleged war crimes and crimes against humanity committed in Tigray. The statement by Michelle Bachelet, UN High Commissioner for Human Rights, in March was probably the most significant step, to date, toward addressing the many calls by all concerned bodies for independent, international, and credible investigations.  At the time the UNHRC made the call to investigate there was high hope that this signaled the possibility that there would indeed be justice for the many atrocities committed against the Tigrayan people.

Unfortunately, however, the UNHRC seemed to bow to political pressure almost immediately in terms of deciding how to fulfill its mission to investigate these crimes. This was evidenced in the decision to undertake a joint investigation together with the Ethiopian Human Rights Commission (EHRC). This announcement was met with alarm and objective criticisms that highlighted the state-run commission’s partiality and lack of independence from the very government implicated in the crimes. Key amongst the concerns raised against this decision by the UNHRC is that the EHRC has a track record of not fulfilling the international standards (Paris Principles) as it has continuously minimized and dismissed violations of human rights across Ethiopia. In many instances, the organization has proven to be an ally to the Ethiopian government showing concerns only when it suits to support its political agenda.

These concerns and criticisms are yet to be addressed by the UNHRC and still need urgent response especially considering they are mainly coming from the community victimized by the crimes to be investigated.

UN Development Programme: One of the most inexplicable and deeply alarming actions taken by an international body as it relates to Tigray has been the infamous memo disseminated by the UNDP – and leaked to the media in early March. This memo not only directly echoes Ethiopian government propaganda, but it ”goes so far as to justify grave crimes against humanity” and forceful annexation of Western Tigray through systematic ethnic cleansing.

In addition, the institution claimed that it is redirecting funding to Tigray despite being notified by other UN agencies that recovery can’t start when the crisis is still ongoing. Neither of these actions have been explained or addressed so far.

World Food Programme: Another UN agency that has, unfortunately, also overstepped its mandate in a counterproductive manner has been the WFP. Tasked with ensuring the delivery of urgent food aid to millions needing immediate relief the WFP has proven susceptible to politically motivated framing that skewed the reality on the ground in favor of Ethiopian government propaganda. Findings from a study done by the United States Agency for International Development (USAID) CORE indicated that the “senior figures [of the WFP] have been too ready to accept Ethiopian government narratives that obstacles to access have been resolved.” It also highlighted actions taken by WFP’s Executive Director, David Beasley which have been misleading.

Additionally, WFP failed to report the aid blockade by Ethiopian and Eritrean forces and in an astonishingly telling statement, WFP spokesperson Peter Smerdon, refused to disclose the number of deaths from starvation stating it is “politically sensitive.” This raises obvious concerns over the agency’s lack of transparency on the ground.

UN Peacekeeping: Following the declaration of war on Tigray, the fate of Tigrayans in Ethiopia’s security sector, including those in peacekeeping missions, came under threat. Almost all ethnic Tigrayans in the security sector were rounded up and incarcerated, including those that were disarmed and forced to return back to Ethiopia from peacekeeping missions in Somalia and elsewhere. In November 2020, a report indicated that “an internal UN document showed concerns that those [Tigrayan] soldiers could face torture or execution.”

These Tigrayan soldiers have contributed to various peacekeeping missions across Africa and some were serving under active UN contracts. A senior official stated at the time that the “Human Rights Division is working to follow up on their situation” but five months later there has not been any meaningful follow-up or actions taken by this division. A report in April 2021 indicates that the ethnic Tigrayans remain detained without proper due process and in severe condition. This shows that nothing has been done since then. Moreover, neither UN Peacekeeping nor UNHRC has made a public statement condemning this violation of international law.

Perhaps the most counterproductive of all the international bodies, when it comes to the ongoing war in Tigray, is the African Union (AU). Even as the United States, European countries, and African leaders like Paul Kagame, President of Rwanda, expressed their deep alarm regarding the human rights abuses in Tigray, the AU as an institution has done nothing to condemn and call for independent investigation and accountability of the atrocities that continue to affect millions.

In addition, between November 2020 and March 2021, the AU held 19 meetings in different African nations and Tigray was not one of the main topics of discussion even in one of those meetings. This inaction by the AU has enabled Russia and China to threaten veto contributing to the UNSC’s inability to intervene effectively.

The only time the AU made a public statement was regarding investigating the human rights abuses in Tigray was when PM Abiy requested an investigation by the African Commission on Human and Peoples’ Rights (ACHPR), in early March 2021. This request comes shortly after Moussa Faki Mahamat, Chairperson of the AU publicly legitimized PM Abiy’s military offensive into Tigray making  PM Abiy’s call for an investigation a quest for validation more than a search for truth and accountability.

Moreover, given that Eritrean troops are implicated in the most gruesome violations of human rights in Tigray, the AU showed no urgency to accept evidence regarding the role of Eritrea and the violation of international laws. In fact, the first urgent call regarding the urgency of the crisis came from Secretary of State Antony Blinken who urged the AU to exert pressure on the matter. Had the AU showed any commitment to do so, the “internal affair” narrative would not hold much power and the UNSC could have reached a different outcome in its resolution to intervene.

In conclusion, even though the crimes committed by Ethiopian and Eritrean troops along with Amhara forces account for much of the suffering and human misery in Tigray, inaction, negligence and politically oriented activity by international actors has also been detrimental. Tigrayans are largely still relying on their community to stop the ongoing war as the lack of commitment from international actors to their mission continues to allow perpetrators to act without fear of accountability. If institutions like the UN do not amend their approach to this crisis, the suffering of millions will continue and likely increase in the coming months.

Saba Mah’derom is a Tigrayan who has been advocating and closely following what has been going on.

Nerea is a graduate student at the University of Wisconsin and currently doing his share of online activism through campaigns to help stop the war on Tigray.

The war on Tigray: glimpses of the destruction in Tigray