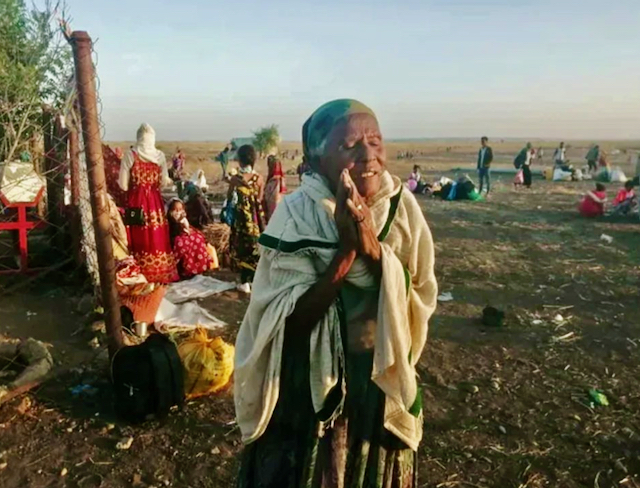 On the 38th day since the war on Tigray started, the complete information blackout continues. The deaths of aid workers, the alarming humanitarian crisis, and the plight of Eritrean refugees have dominated the stories today, December 11, 2020.

Death of at least 4 aid workers

Three employees of the Danish Refugee Council (DRC) have died in Tigray last month. A staff member of the International Rescue Committee (IRC) was also killed in Hitsats refugee camp near Shire. Several news outlets such as AP, Aljazeera, The Telegraph, and BBC have reported this shocking news and the DRC has issued a statement saying that it is deeply saddened by the death of its staff members and reaffirmed that the safety and security of humanitarian workers remains a top priority.

An estimated 600,000 people in Tigray, including 96,000 refugees from neighbouring Eritrea, were dependent on food aid before the fighting began. Nearly 50,000 refugees have fled to Sudan and about 1 million are thought to be displaced. The impact on civilians has been “appalling,” the U.N. human rights chief said this week. The Amnesty International said “We are on the brink of a humanitarian crisis in northern Ethiopia, and the federal authorities there are making the situation worse.”

As Tigray remains sealed off from the rest of the world, Ethiopia’s government is not cooperating with the U.N., rejecting it as ‘interference.’ The UNHCR continues to echo calls for unfettered access to Tigray to reach people in need, both Tigrayans displaced by the war and Eritrean refugees caught in the conflict with no access to services and supplies for more than 5 weeks.

Up to 10,000 Eritrean refugees are forcibly repatriated to Eritrea, witnesses say. Aljazeera reports that the UN’s refugee agency (UNHCR) has received ‘overwhelming’ reports of Eritrean refugees being killed, abducted and forcibly returned to Eritrea. Though hard to verify due to restricted access, these constitute major violations of international law if confirmed.

The IOM had a press release refuting allegations that a group of Eritrean refugees are being held by IOM and being processed for forced for forced return in Addis Ababa. It is intriguing that the IOM said that one of three centers in Addis Ababa was taken over by the Ethiopian Government’s Agency for Refugees and Returnees Affairs (ARRA) on 3 December.

According to Bloomberg and Reuters, the U.S. urges immediate withdrawal of Eritrean troops from Ethiopia. Reuters has this statement by a State Department spokesperson:

We are aware of credible reports of Eritrean military involvement in Tigray and view this as a grave development. We urge that any such troops be withdrawn immediately. We are also aware of reports of human rights violations and abuses in the region. All parties must respect human rights and international humanitarian law. We and other international partners continue to urge an independent investigation of the reports and accountability for those found responsible.

Given the credible reports about Eritrea’s role in this war and reflecting on the scant information we have about the so called ‘peace pact’ between Abiy and Isaias that led to Abiy’s Nobel Peace Prize in 2019, one can opine that they had a ‘war pact’ instead.

Why did Abiy reject calls for negotiations? Perhaps he could not decide to negotiate unilaterally about a war both Abiy and Isaias began.

Why did Abiy reject calls for independent probes into war crimes and human rights abuses including attacks on refugee camps, U.N. personnel and humanitarian staff? Perhaps Abiy and Isaias want to hide not only that they have colluded but also that they have violated international humanitarian laws and committed war crimes.

Mark Lowcock, in The Washington Post, asks “what can be done?” and asserts that:

What’s happening in Tigray right now is fundamentally a political problem. It won’t be resolved by violence. In the meantime, it is civilians who are bearing the brunt of the conflict. This must stop.

I also point you to this situation report from the European External Programme with Africa (EEPA), which presents concisely key information confirmed as of today, December 11, 2020.

The Targeting of Tigrayans in Ethiopia: Testimonials 1