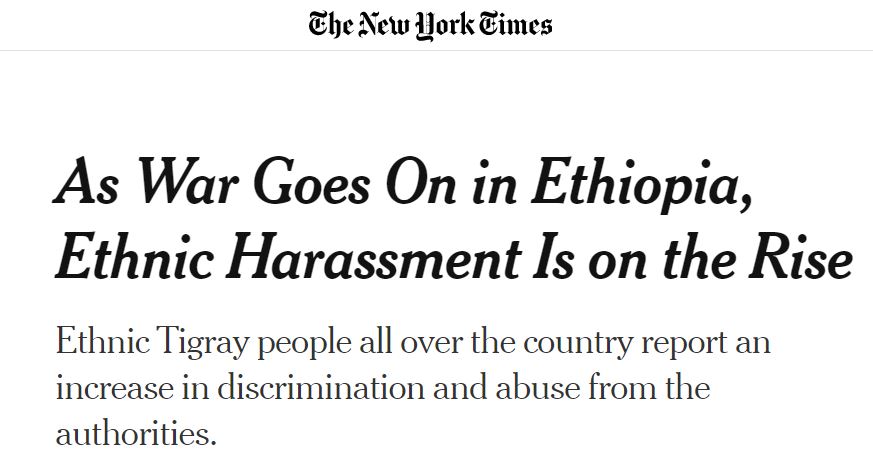 The following excerpt is from today’s article in the New York Times. These seemingly anecdotal stories barely scratch the surface of the ethnic harassment, discrimination, abuses (including physical abuse), arbitrary detention, extortion of money that Tigrayans throughout Ethiopia have been enduring for the last 39 days.

Today, if you are a Tigrayan

According to Euronews, the UN calls ‘forced returns’ of Eritrean refugees fleeing the war in Tigray ‘disturbing.’ Ethiopia on Friday said it was returning thousands of refugees who ran from camps in its Tigray region as war swept through, putting them on buses back to the border area with Eritrea. Ethiopia had said the military offensive “was not a direct threat” to the 96,000 “misinformed” Eritrean refugees. Ethiopia said the refugees’ “unregulated movement” makes it difficult to ensure their security.

The recent trend has been that the UN agencies and others use the strongest terms possible saying they are ‘deeply concerned’, ‘alarmed’, ‘urge’, ‘call for immediate ceasefire, unhindered, unfettered humanitarian access.’ The Ethiopian government always denies all problems, shrugs off comments and requests, and brags about victory and being in control.

The Mai Kadra massacre still begs an independent investigation as contradicting narratives and survivors’ horrific stories continue to emerge. A few days after we read horrific stories of fleeing survivors in the New York Times, Aljazeera has published this article today. In yet another account, Maesho, 34, told npr that “[Militias] were slaughtering people with knives and machetes.”

From Sky News: First aid convoy of seven trucks belonging to the International Committee of the Red Cross is reported to have arrived in Mekelle today, December 12, 2020.

Can the AU Deliver an Independent Investigation of HR Violations in Tigray?

Cultural Genocide: The Destruction of the Martyrs’ Memorial Museum in Mekelle

The Making of Tigray Genocide: The Rhetoric that Set the Scene