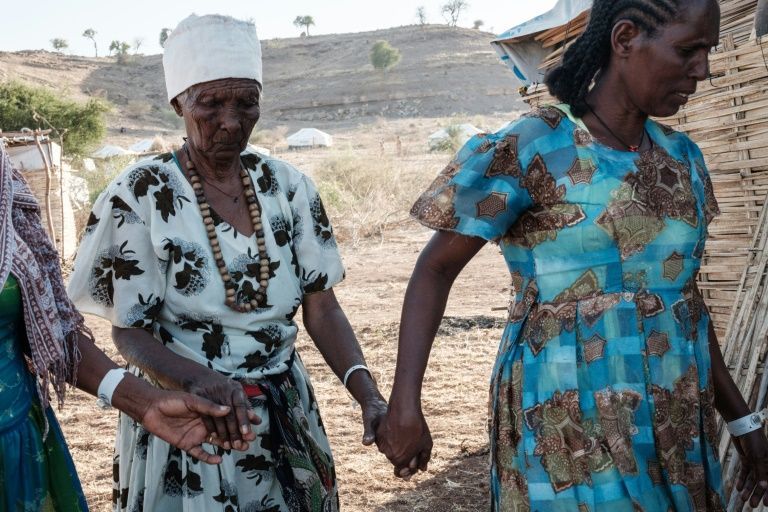 The UN says four percent of the over 50,000 people who have fled Tigray for Sudan are over 60 years old.

“At this age, I shouldn’t be here,” said Asafu Alamaya, 80. She had begged her daughters to flee, and to leave her to die at home. Her daughters refused to abandon their blind, frail mother in their war-ravaged home town of Humera.

“We couldn’t leave her behind. If she makes it, so be it. If she dies on the way, we children will bury her. Either we live together or we die together.” Sandayo, Asafu’s daughter.

Walagabriel Sium, a 73-year-old farmer, does not have the stamina to endure the long lines for food and water. And as the shelters at the camp are designed for families, people like Walagabriel, who arrived in Sudan alone, do not automatically receive accommodation. For 17 nights now, he has been sleeping on the red, sandy ground under the starlit sky, with nothing, not even a blanket, to shield him from the elements. “All I want is a mattress to sleep on and some water to drink,” he said.

“At my age I shouldn’t have to run or cross any river. I should be praying in my church. But we were forced to do this. And I must accept God’s will.” Arrafu Mbaye, 70.

In the first two weeks of the war, there weren’t any issues with food supplies. But with banks closed, how could you buy anything? Some people with lots of cash in their hands managed to buy large quantities of grain. And later, when the banks reopened temporarily, the shortages began. Food prices inflated alarmingly. Tomatoes were being sold 100 birr [$2.6] per kilo, up from 20 birr; potatoes were 40 birr per kilo, from 10 birr. The supplies of basic food items started to run out. Bread, injera, teff and wheat grains vanished.

I was faced with the threat of hunger. Some of my friends were already starting to starve. Fortunately, the people of Mekelle were all kind, despite the fact that I and my friends were Amharic-speaking. It was our Tigrayan neighbours and friends who were feeding us in those difficult times. For instance, one of my friends was eating in his landlord’s house for almost one month. She did not ask him to pay rent. Shops were lending us items. They were all very kind.

Civilians in Tigray speak of horror

Ethiopia said that power and phone connections had been partly restored in Tigray. The shutdown, coupled with restrictions on access to the region, made verifying the situation on the ground difficult.

Abiy visited Mekele on Sunday for the first time since fighting began. He met with soldiers and said that damaged telecommunications and other key infrastructure were being repaired.

I personally attended the funeral of three people. But I know many more people that were killed.

The view in Mekele city is that the war is just starting and things are only going to get worse.

Zadig Abraha told AFP that any reports of extrajudicial killings by Ethiopian soldiers were “false”.

OCHA reports on dire shortages of vital supplies, including food, water, fuel, cash, electricity and telecommunication services in Tigray. More than 63,000 recorded as internally displaced, but numbers are expected to change if access to the region is allowed.

U.K. government says it is concerned by reports of ethnically-motivated attacks within Tigray and elsewhere in Ethiopia

Here is the most accurate account of the run up to the war on Tigray that one can find. Finian Cunningham speaks at Gorilla Radio with Chris Cook.