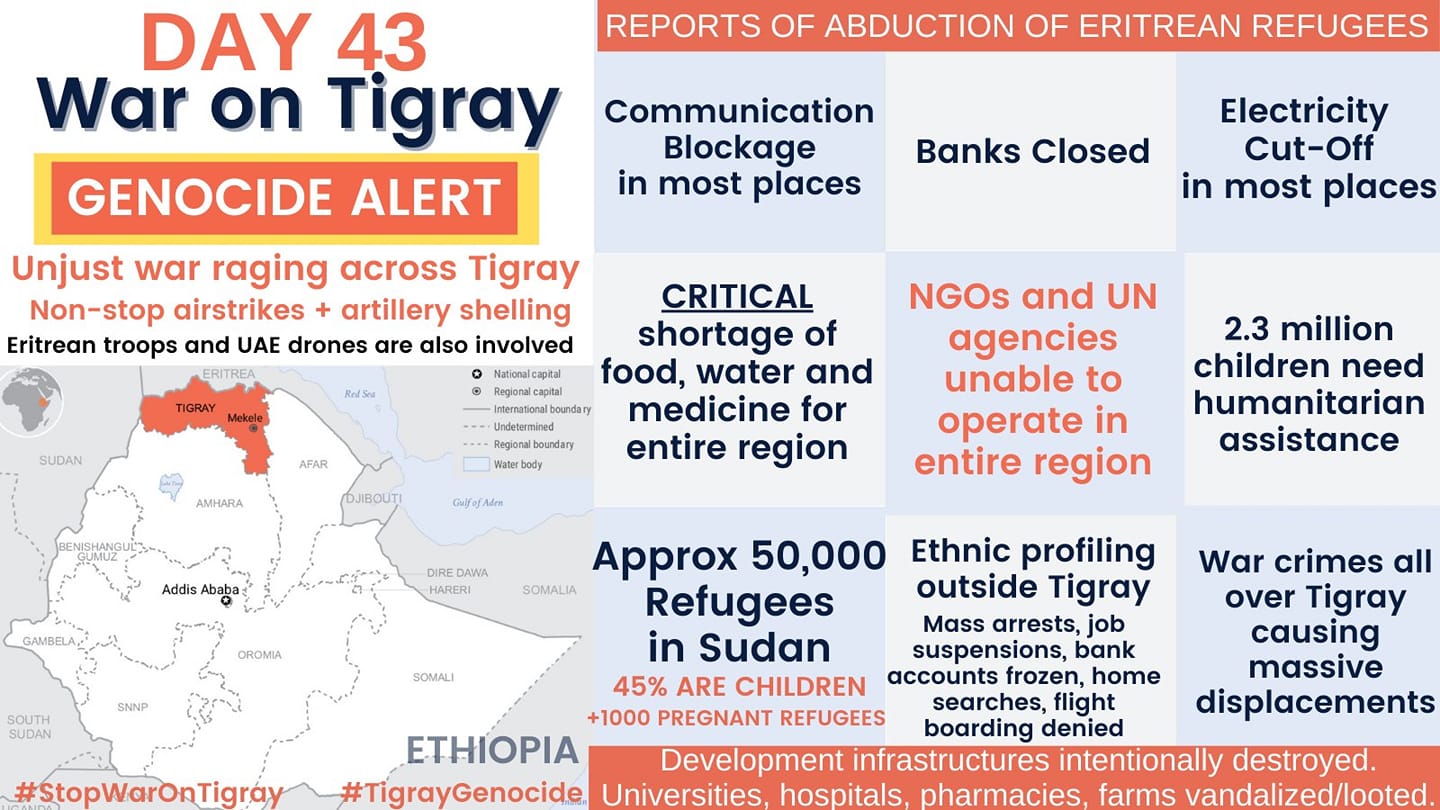 Tigrayans living in Addis Ababa described ethnic profiling and growing harassment. Such abuse and discrimination by neigbours, strangers, and government officials could widen the rift among Ethiopia’s increasingly polarised ethnic groups, leading to renewed conflict. Several of the Tigrayans said police officers have harassed them on the streets of Addis Ababa after checking their identity cards, which indicate their region of birth

“The war is not a surprise. But what came after the war, the way [Abiy] is doing it, is a surprise.”

One woman, originally from Tigray, said members of her family who work for the government had their homes searched by armed men who took an inventory of their valuable household items – including their fridge, sofa and jewelry. The woman said her Tigrayan-sounding surname now “terrifies” her. “To capture the top criminals in the TPLF, the government breaks the hopes, lives, and dreams of so many,” she said.

When Semira’s relative was able to escape the town thanks to his Saudi Arabian ID, he brought bad news with him. Five of their family members died after being shot. “It had been a long time since I last saw my father cry,” said Semira, who is half Tigrayan, half Eritrean.

As the communications blackout in the region has slowly been lifted, fresh reports have emerged of war crimes and other violations and abuses of human rights, including eyewitness accounts of the massacre of hundreds of people in Mai-Kadra on 9 November. Survivors recount a systematic, planned attack against ethnic Amhara civilians by Tigrayan youth groups, local police and militias. Meanwhile, in Sudan, ethnically Tigrayan refugees from Mai-Kadra reported attacks on ethnic Tigrayans perpetrated by Ethiopian government forces and an allied Amhara militia in Mai-Kadra at the same time as the massacre of Amhara civilians. Amnesty International’s Ethiopia Researcher, Fisseha Tekle, has stated that Mai-Kadra may only be the “tip of the iceberg” with details emerging of ethnic targeting and other attacks on civilians in Humera, Dansha and Mekelle.

My opinion on the Mai-Kadra case is that the only way to settle this incessant ping-pong in trying to put the blame on the other is through an independent investigation.

Some 2.3 million minors are struggling to get basic humanitarian assistance like treatment for malnourishment, critical vaccines, emergency medicines, and water and sanitation supplies, UNICEF, the UN agency responsible for children, said Tuesday. “Meeting the critical needs of children and women must not be delayed any longer,” the UNICEF statement said.

“This agreement says the UN, and other organizations who are taking care of refugees, have unlimited access to this region. We probably had different definitions about unlimited access.” In reality, the agreement granted access in areas controlled by the federal army, and “only when the government allows that every single step,” says Chris Melzer, the UNHCR spokesperson in Ethiopia. Calls for humanitarian access are echoed in a statement by InterAction.

“Refugees International is concerned about reports that Ethiopian government forces and Eritrean soldiers have forced Eritrean refugees to return to Eritrea or other locations where they may be in danger. For example, Eritrean refugees who fled to Addis Ababa to avoid the fighting in Tigray have been rounded up and returned to camps in Tigray. This is unacceptable, as camps in Tigray are in the middle of an active conflict zone and have little access to food or medical supplies.”

“During the return of our forces from combing the area around Jabal Abutiour inside our territory, they were ambushed by Ethiopian forces and militias inside Sudanese territory, as a result of which lives and equipment were lost,” the army said.

The whole country [Ethiopia] is on the precipice of widespread ethnic violence. That is because Tigray was a tinderbox long before fighting broke out on November 4 – as was the broader basket case of Ethiopia.

Ethiopia’s latest and biggest problems center on historic disagreements about two things: the degree of regionalism versus centralism in political power structures; and tensions between Ethiopian and sub-ethnic identities in the same power contests. Part of the reason Ethiopia grapples with such ethnic challenges is because the country has its own imperial legacy. It was long, and largely remains, a conquering African empire.

Still, the main reason Ethiopia gets more than its fair share of free human-rights-violation passes, is that it happens – at least for the fleeting now – to be seen as a useful partner and/or proxy for Washington’s aspirations and machinations in a key sub region of its new favorite military playground…Africa. Make no mistake: while the US doesn’t and can’t possibly pull all the levers, nor predict all that’s coming down the conflict pipes – there are American hands at work in East Africa. That what they tend to craft is diplomatic top cover, international apologia, and security assistance – well, that often puts the region’s residents on the horns of an African dilemma on Africa’s Horn. Because as it turns out America’s newest regional command (since 2007), US AFRICOM – has almost nothing to do with the well-being of average Africans.