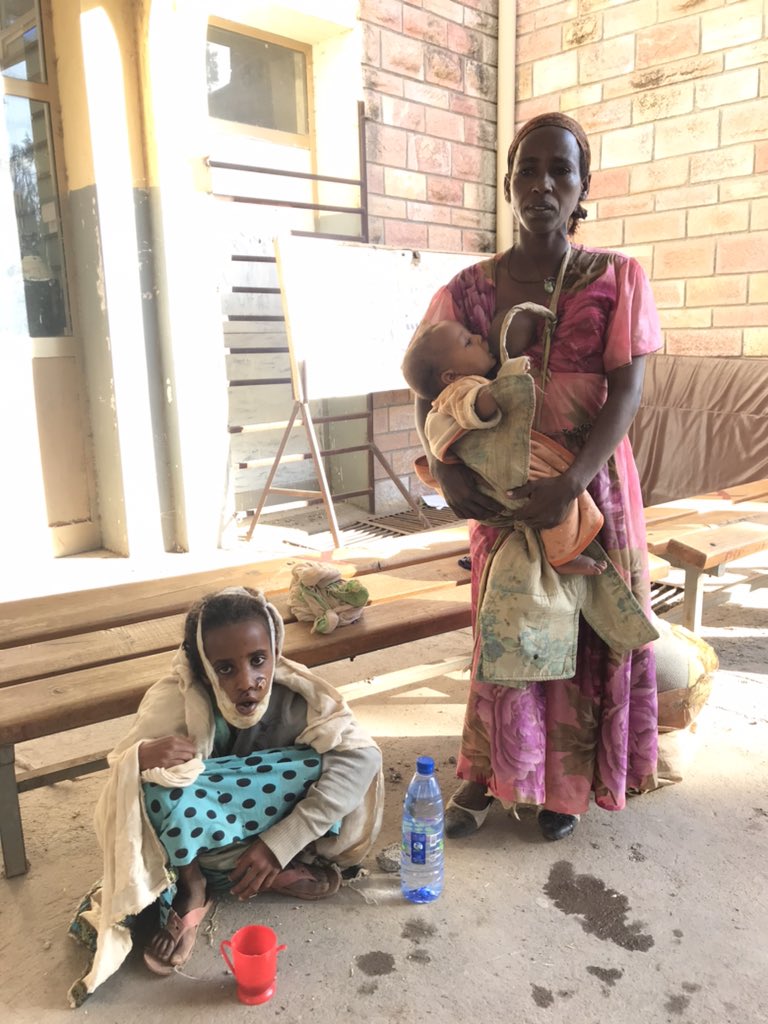 Tigray is on the brink of enormous humanitarian disaster

Western Tigray: They are really on the brink of a massive humanitarian disaster. You see Amhara Special Forces everywhere. There was a new sign that said ‘Welcome to the Amhara Land’. The livestock of the Tigreans is stolen en masse. They say they don’t know by whom, but it is indications that they are being chased away from there. I feel that the Tigreans were no longer welcome there, although the Amhara themselves say the Tigreans are welcome.

Mai Kadra: No independent investigation has yet been done. I was there for two hours. I saw piles of stones in various places at a church, that were graves. In one place I saw a lot of stones, 62 people were buried there. We spoke to some witnesses. Tigreans were not there. They had fled or were in prison.

Hospital in Shire: That was a big mess. Looted, we heard, by Eritreans. I saw a girl who had shrapnel in her face. The wounds were not well cared for, she could not eat and only drink a little. It looked bad. And I saw a mother with a deep cut on her chest from a machete. The doctors and nurses did not dare to come because of the constant looting. The people were just lying there. There was no water and no electricity.

Soldiers from Eritrea: They were wearing Ethiopian uniforms. Residents said that they were constantly being robbed by Eritrean soldiers. They heard that they spoke with an Eritrean accent. I saw two military pick-up trucks with Eritrean number plates. Someone showed me a picture of an Eritrean tank loaded with furniture. Probably looted.

Signs of malnutrition: There is a food crisis. It could become a famine if no help comes.

“I will go to the mountains and join the fighters”

Alem Hadush lost his future when the shells hit the city of Wukro. “My wife was pregnant. We were expecting our first child. Now both are dead,” he says on the phone. “She died when the Eritrean artillery bombarded our city.” Hadush tells how Eritrean forces murdered six of his friends, and they are indiscriminately looting in many places in Tigray.

According to aid workers and diplomats, many thousands of soldiers from Eritrea are involved in the fighting. Eyewitnesses confirm this.

“On Tuesday, the Eritrean armed forces killed 81 civilians who were holed up in the Al-Nejashi mosque,” said a woman who managed to escape the massacre and arrived after a ten-hour walk in Mekele.

If civilians were deliberately killed by a party or parties to the conflict, these killings would amount to war crimes and there needs to be independent, impartial, thorough and transparent investigations to establish accountability and ensure justice. We have received allegations concerning violations of international humanitarian law and human rights law, including artillery strikes on populated areas, the deliberate targeting of civilians, extrajudicial killings and widespread looting. What has happened in Tigray over these past seven weeks is as heartbreaking as it is appalling. These reported allegations are likely only the tip of the iceberg regarding the extent and seriousness of the violations of international humanitarian law and international human rights law committed by all parties to the conflict. There should be unimpeded humanitarian access to all areas of Tigray where civilians have been affected by the fighting. This is all the more concerning given that fighting is said to be continuing, particularly in some areas of north, central and southern Tigray.

This underscores the need for independent human rights monitors to be given access to Tigray to adequately assess the human suffering resulting from the conflict, verify allegations and to help ensure accountability for violations. What has happened in Tigray over these past seven weeks is as heart-breaking as it is appalling.

UNHCR has launched an urgent appeal for $156 million to help 130,000 people affected by the ongoing violence in Tigray. Only 30 percent – about $46 million – of the requested funds have been received so far. The UN has repeatedly requested unimpeded humanitarian access across the region. There is full-scale humanitarian emergency.

Abiy Ahmed Asks Diaspora to Finance His War On Tigray