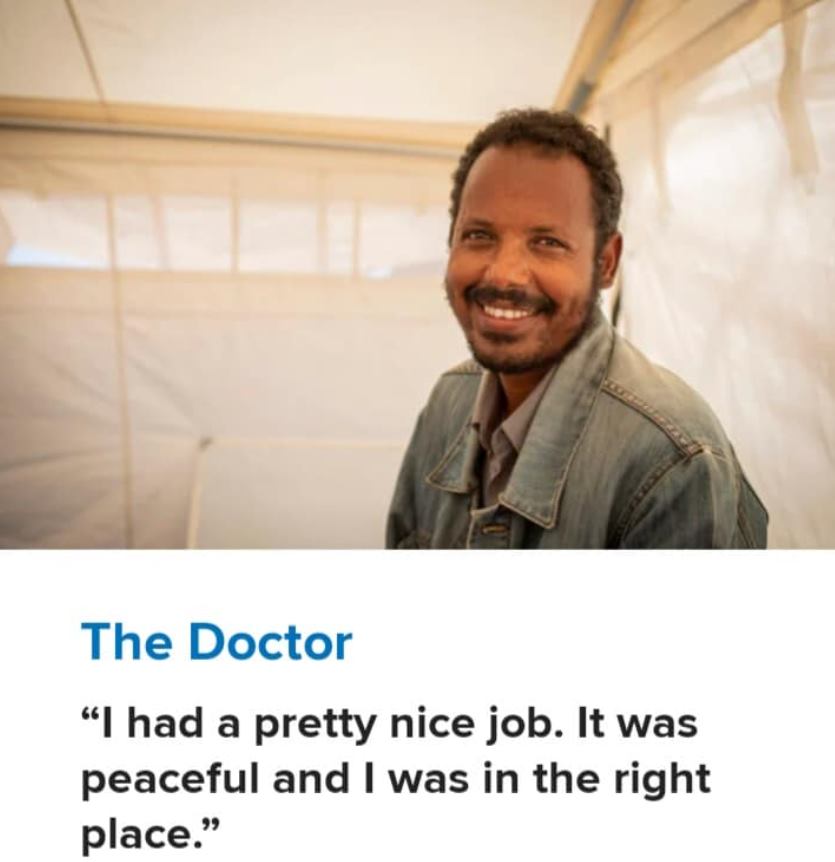 It’s Not Safe to Return to Ethiopia

Haminat Dibrsyo says she would only return home if it’s safe and secured, but as long as it’s not safe yet, she will stay with her children in Sudan.

Amanael Kahsay:  He was working as a day labourer on a farm near the city of Mai Kadra when Fano descended. “Fano from the Amhara region came, then took us all out from our homes. We saw our neighbours killed and slaughtered, in the same way as you cut wood, with an axe and knife. We managed to escape and hide in a field for four days. On the fifth day, we made our way to the Sudanese border. [Fano] youths were sent to kill us. [A group of] more than 70 were trying to kill us. We hid ourselves in the fields. They hunted us. On the way many were killed. We passed many dead bodies. They checked the IDs of people…if they find someone with Tigrayan origin…[they] slaughter with a knife. We know he is planning to exterminate us, all Tigrayans in general. We don’t believe him [Abiy] at all. Until the Tigrayan government calls us to go, we’ll never go back.”

Gebrehywit Aragawe, a 44-year-old priest, arrived in Sudan with his wife, Latakidan, and two-year-old daughter, Hewa. They had seven other children. “The militias stripped them and beat them in front of us. All of them died.”

Tiki says if Abiy Ahmed continues in the role, they will not go back to Ethiopia. He says they have a Tigrayan government that came with elections, and that Abiy Ahmed is not their government.

The people who fled Tigray

Just a few weeks ago, they worked as doctors, teachers, artists. One couple were newlyweds. Then the shooting and the shellfire started. The lives of those who fled have been shattered. None of them thought they would ever be refugees and have to leave a lifetime of investment, hard work and family behind.

“I had a pretty nice job. It was peaceful and I was in the right place.”

Dr. Daryelowm had worked as a specialist for nearly four years at a hospital in western Tigray.  “We started off working out of a house, using scraps of paper as scripts for the patients. It was a busy day and then I heard the blasts like ‘boom boom boom!’ We heard there were civilians who had been wounded by the bombings. People were leaving without anything, just rushing away to save their own lives. We have to fight to the end. We can’t give quality care like this, but we can give something, some basic care to the people who are here.”

“Life was very good, we had a full life. But now we are here. We were in our house, when we were attacked. Our house was burned. Everything was burned, When I was a child, I wanted to be a teacher because teaching is a great profession. To build a generation through teaching is a great role. I’m proud because I can shape the future generation. We need better services; we need clothes and food. If we can’t eat, how can we help these children?”

“Using my hands passes the time and helps me relax and think about other things.”

Without any of his art supplies, Futsum has started using what he finds around him – metal offcuts, building materials and a used-up welding stick – to carve sculptures out of stone and wood. “It calms my mind,” says Futsum.

“I made films about tragedies, about death and how nothing good comes from killing. They are about how rational people can solve their problems. I want to go back and do my art. I also want to continue making movies. You know, many people have forgotten where they came from and I want to make movies to remind them of that,” he smiles.

Fusuh and Hellen had only been married four months before they had to flee their hometown. “We heard the fighting around town then suddenly, heavy gunfire hit the roof of our house, sending sparks and shrapnel everywhere. We grabbed what we could and ran for our lives. I’m a bit depressed here as we are worried about our family. But at least we are okay and out of the war.”

Meserei was working at a juice bar in her town when fighting broke out. “Someone came and told me that armed people were coming to kill us, so I ran. I left with nothing – no food, no bags, no clothing. Two weeks after arriving in Um Rakuba, I am still wearing the same clothes I had when I fled Ethiopia. You know, I’m not okay. I miss my friends, my family and all my clothes. I literally have nothing here!”

“He [Abiy] felt as long as TPLF was lurking around and still held levers of economy and power, he would not be settled… And his fears were confirmed by Isaias Afwerki, who has the same paranoia… The two men met and confirmed their fears and suspicions about the TPLF. There is no doubt that both Abiy and Afwerki had a vested interest in this war and were planning it, probably going back two years. All the to’ing and fro’ing between Eritrea and Ethiopia were actually related to this conflict. All the signs were there that the two leaders were planning something major.” Rashid Abdi, a Kenya-based Horn of Africa analyst.

Military sources said that Sudan and Ethiopia countries are unlikely to go to war on the border, however increasingly strained ties between Sudan and Ethiopia might tip the scales for the TPLF. Lt-Col Swarmi Khalid said that the Sudanese forces have not yet offered material or logistical support at the border to the TPLF. “If Ethiopia continues to escalate, this may change things. Sudan is particularly influential with Ethiopia and Eritrea. Ethiopia must remember that it must have a peaceful stand with the Sudanese government so that Sudan is not forced to enter into any conflict to support Tigray.”

“Sudan is extremely adept at these kinds of proxy conflicts and very opportunistic. [And] Abiy’s hands are so tied with Tigray so he cannot move against them. The Ethiopians will probably move at some point [but] if they move now, the Sudanese will just open a supply route to the TPLF and Egyptians will get in on the act so it could become a much more serious, regional conflict. The only path out of this is negotiated settlement yet he has criminalised the entire TPLF, tagged them with treason. So he’s locked himself to a place where he either fights to the death or surrenders.” Rashid Abdi