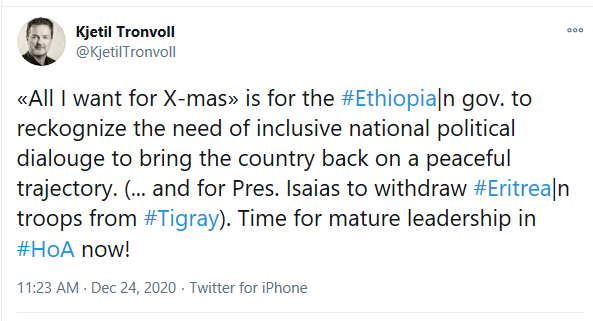 Martin Plaut is collecting evidence of ‘The Tragedy of Adigrat.’ He writes,

It has been impossible to get hard evidence of what has taken place in the Tigrayan town of Adigrat, but it is clear that something terrible has happened. I am now starting to collect evidence of what took place.

And if any of the information is inaccurate, please let me know.

“The plan seeks to increase the readiness of the humanitarian community in Ethiopia to sustain relief assistance to the already existing vulnerable people in Tigray. The plan also seeks to prepare the humanitarian community to respond to the protection and other needs of an additional case load that are likely to be affected in Tigray, Amhara and Afar regions by the crisis in December 2020 and January 2021.” UNICEF