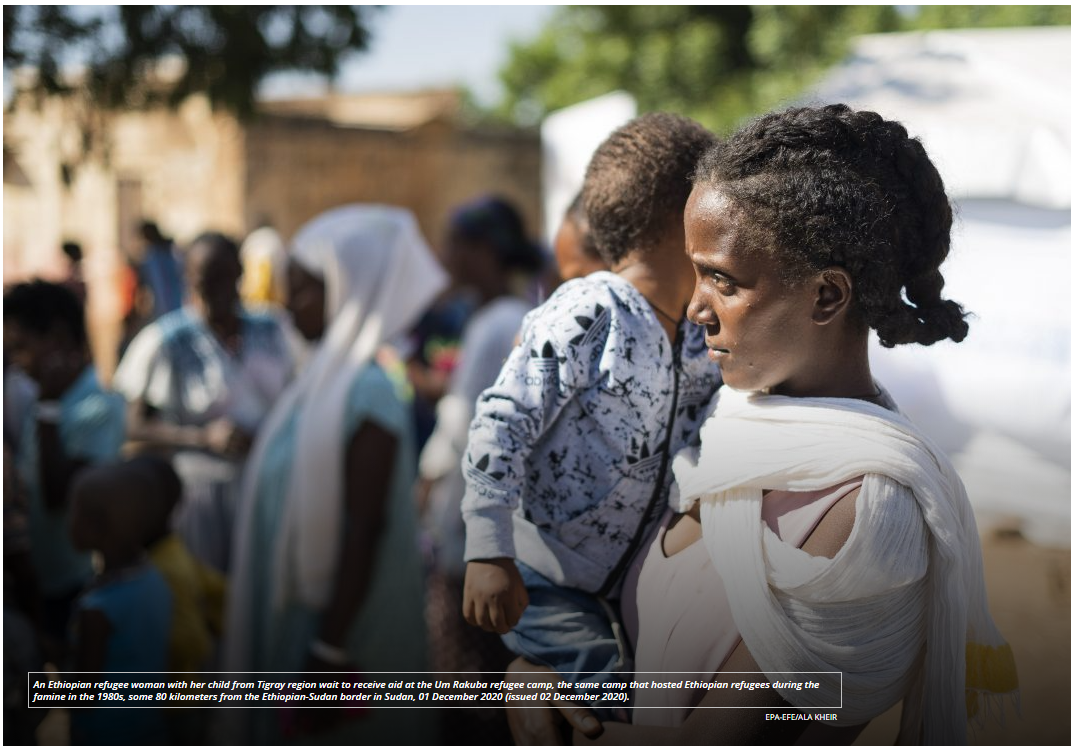 The southern Tigray inter-agency assessment mission has concluded, and findings from Chirchir district in Alamata show that half of the displaced people have returned to their homes. Life in Alamata is gradually returning to normal. People, however, reported that they still do not feel safe.

The western Tigray mission conducted a rapid assessment in Dansha on 22 December and proceeded to Humera on 28 December, and will go on to assess the situation in Shiraro and Shire.

As of 28 December, more than 54,400 Ethiopian refugees fleeing Tigray have registered in Sudan. The Sudanese Government and humanitarian partners are scaling up life-saving assistance to them.

EU calls for investigation into ‘ethnically targeted’ violence in Ethiopia

Ethiopia should “impartially” investigate and hold accountable those responsible for the massacre in the Benishangul-Gumuz region, the EU’s External Action Service (EEAS) has said, voicing concerns over what it sees as “ethnically targeted violence.”

“Ongoing reports of non-Ethiopian involvement raise additional worries,” EEAS said in a statement on December 25, whilst praising Sudan for providing shelter to Ethiopians fleeing the conflict.

According to WFP, since the beginning of the conflict in Tigray, more than 40,000 Ethiopian refugees have fled to Sudan. EEAS stressed that all refugees and displaced people within Tigray and beyond should be protected from any act of forced and premature relocation or return, and that all parties to the conflict should uphold international humanitarian law, primarily by ensuring the safety of aid workers.

Gradually, the evidence of the involvement of Eritrean Forces in the Tigray conflict has mounted. Despite attempts by Prime Minister Abiy Ahmed’s Government to restrict access to the war zone, news has filtered out. On Sunday, 20 December 2020 and for the first time, an independent Belgian news outlet confirmed in gruesome detail the atrocities committed by Eritrean Forces.

We now have first-hand reports of what is taking place. These are supported by parties in Tigray like the Assimba Democratic Party, that opposes the ruling Prosperity Party. Eritrean Forces are deep inside Ethiopia and fighting alongside Federal Forces and Amhara Militia. This war has become an international conflict with catastrophic ramification across the whole region and beyond.

We acknowledge … the evidence that Eritrean Forces have undertaken and participated in what can only be described as war crimes. Atrocities, including the killing of civilians and rape of women, have been perpetrated. This has been accompanied by widespread looting, including centuries-old religious artifacts, by organised groups that are coordinated from Eritrea. We hear of lorries being sent to accompany Eritrean units whose specific mission is to remove anything of value that they can lay their hands on. This loot has been taken to Eritrea, most of it stockpiled with some appearing in local markets…(Read full letter here.)

UK Government fails to respond to reports that Ethiopia shot at a UN convoy in Tigray and that Tigrayans have been removed from their jobs but says it is concerned by reports of mounting Eritrean involvement; and says “We are extremely concerned that humanitarian agencies, including the UNHCR, do not have access to refugee camps in Tigray.”

Day 39 of war on Tigray: Ethnic harassment, the tip of the iceberg

Statement of the Tigray government