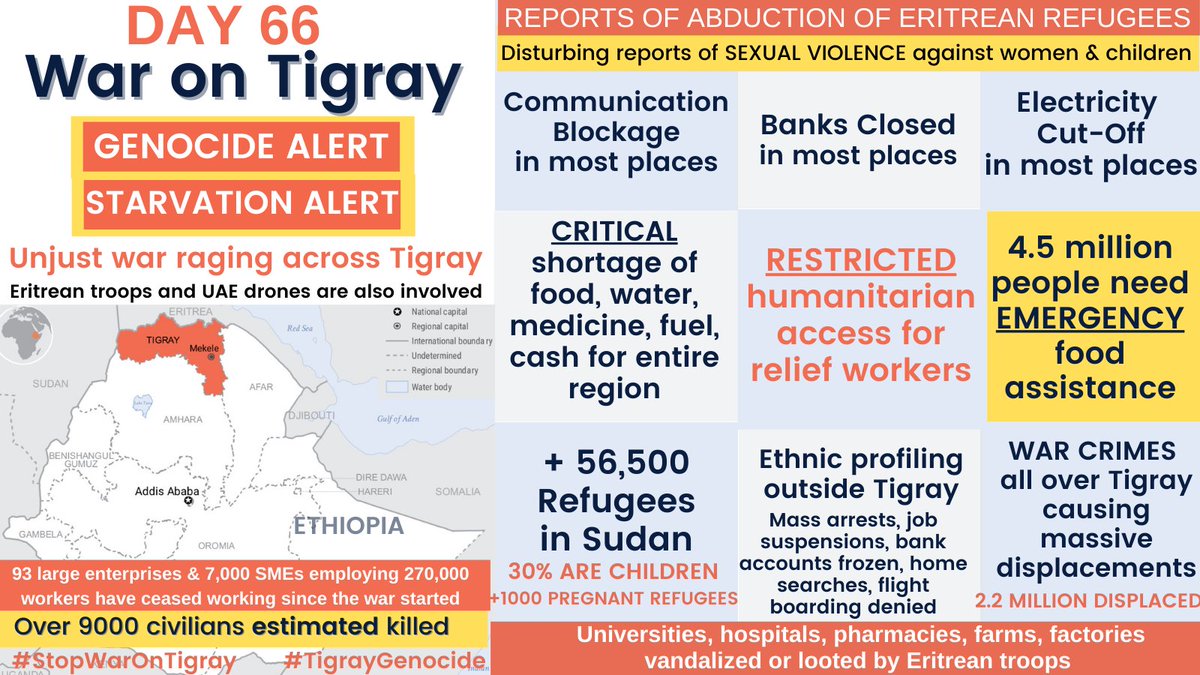 Major General Belay Seyoum, the head of the Ethiopian army’s northern division, admitted that “a foreign force entered the country” and that soldiers from the secretive gulag-state had assisted them.

This corroborates extensive Telegraph reporting which all points towards an Eritrean shadow war in Tigray and egregious abuses, including massacres and pillaging.

Witness one: “A lot of Eritrean soldiers died in that [Idaga Hamus] battle. So they took revenge on the town’s civilian population, shooting at everyone they encountered and even killing a priest.”

Witness two: “After Adigrat was captured, Eritrean soldiers gathered a group of young males in civilian attire and accused them of being TPLF fighters. They were taken towards the outskirts of the city. At least twelve of them were shot dead. I personally saw the bodies of other people in the city who had been killed by the same soldiers.”

Witness three: “I saw one lady. She was lying on the ground. She was dead. One [child] was about seven years old, but he was also dead. They were killed by a bomb. The other one was a baby. He was trying to breastfeed from her.”

How Eritrea got involved

In just over two years, Abiy and Isaias made nine official visits to each other’s capitals or went on joint delegations to Saudi Arabia and the UAE. Their final meetings took place at their respective military bases.

On 18 July 2020, Abiy visited Eritrea’s main military training base at Sawa where he inspected troops and military equipment.

On 4 November 2020, the Tigray war began. By this point, Tigrayans had already been warning that Ethiopian and Eritrea forces were planning to attack. Events since suggest their fears were founded.

There have been reports of young Eritreans being rounded up as conscripts to support the war effort; people being picked up and transported without warning to remote locations along the Ethiopian border; Eritrea hosting retreating Ethiopian forces; and Ethiopian forces being flown into Asmara overnight to conceal their presence.

On 10 November, Debretsion Gebremichael said: “Since yesterday, the army of Isaias have crossed the country’s boundary and invaded. They were attacking via Humera using heavy arms.”

On 9 November, Abiy claimed that the conflict in Tigray was a law and order operation that would wrap up soon. He said concerns that Ethiopia will descend into chaos are unfounded and a result of not understanding our context deeply.

The Tigray war is unlikely to be a brief conflict or produce an easy victory for Abiy and Isaias. For Eritrea, the war already appears to be going badly. Having allegedly looted religious sites, homes and factories, Eritrean forces are reportedly bogged down and vulnerable to ambushes. Eritrean soldiers are blocked in attempts to leave Tigray. This has stopped the Eritrean transfer of looted goods out of the region.

The problem for both him and Abiy is that this conflict might drag on for months, if not years. The war could end up destabilising either, or both, governments.

Fighting is still going on in several parts of Tigray and almost 2.3 million people need aid. Food supplies are very limited, looting is widespread and insecurity remains high. The humanitarian situation is dire and two out of four refugee camps in Tigray remain inaccessible.

Fighting was reported in rural areas as well as on the periphery of regional capital Mekelle and the towns of Shire and Sheraro, among other locations.

Schools, hospitals and administrative offices had been looted and damaged. Only five out of 40 hospitals in Tigray are physically accessible, with another four reachable by mobile networks. Health facilities in the major cities that were partially functioning had “limited to no stock of supplies and absence of health workers”.

Regional and local bureaucratic hurdles were preventing some agencies getting into Tigray. Humanitarian supplies and equipment were being looted in some areas.

Tigray Emergency Coordination Center estimated that more than 4.5 million people needed emergency food assistance, including 2.2 million people who had been forced to flee their homes within Tigray.

Tigray remains unstable as fighting continues in several areas, according to the UN.

“Supplies are very limited and only locally produced food items are available and at increasing prices. [There is] a dire humanitarian situation with poor access to services and limited livelihoods.”

Ethiopian general says troops have killed top TPLF officials and arrested nine other TPLF leaders. There has been no independent confirmation of the killings and arrests.

Sebhat Nega, a founding member of the TPLF, has been captured, said Jeylan Abdi, a spokesperson for the federal police.