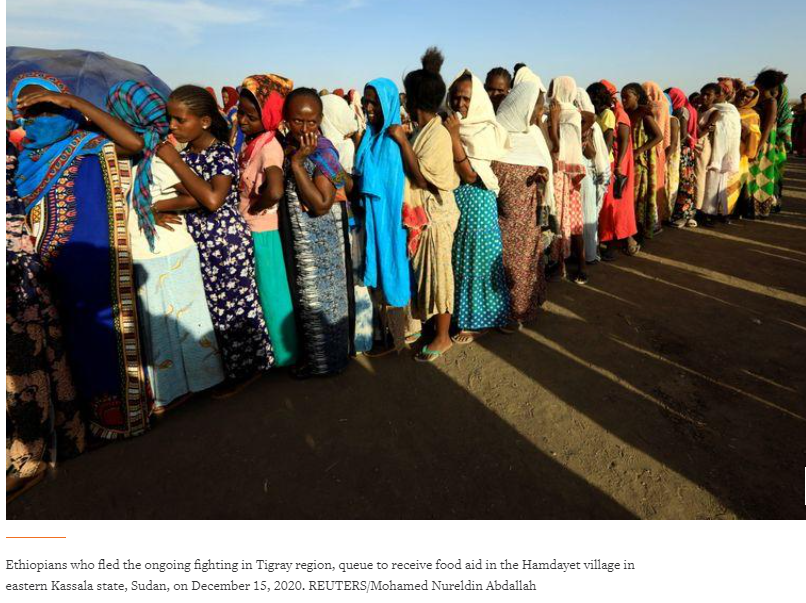 Soldiers and police in Mekelle, home to half a million people, have expressed concerns about insecurity, with one saying women were raped this week, after the city fell to federal forces during a war late last year.

At Friday’s meeting in Mekelle broadcast on ETV, a state TV channel, an unidentified man in Ethiopian military uniform spoke of repeated abuses against women.

“I was angry yesterday. Why does a woman get raped in Mekelle city? It wouldn’t be shocking if it happened during the war because it is not manageable and could be expected for such a thing to happen. But women were raped yesterday and today when the local police and federal police are around. We need to communicate among ourselves and act together and strengthen our chain of command.”

Mekelle’s mayor did not answer phone calls seeking comment, while national military and police spokesmen, Abiy’s spokeswoman and the spokesman for a government taskforce on Tigray did not immediately respond to questions.

Another soldier complained that when criminals were arrested, there was no one to hand them to. “Basic institutional structure has been destroyed,” he said. A policeman said he and colleagues had not been paid.

Fighting is continuing in some parts and more than 2 million people need aid, the UN said this week.

Two U.S. senators have called on their government to consider imposing sanctions on any political or military officials found responsible for human rights violations during a month of conflict in Tigray.

Concern has mounted over reports of civilians targeted by both sides. That poses a policy dilemma for the United States, which considers Ethiopia an important ally in a volatile region, especially against al Qaeda-linked Islamist militants al Shabaab in neighbouring Somalia.

The proposed resolution was introduced on Wednesday by Senator Ben Cardin, a Democrat, and Senator Jim Risch, a Republican.

“The ongoing fighting in Tigray has already cost thousands of lives and created a humanitarian crisis of disastrous proportions, threatening the long-term stability not only of Ethiopia, but the entire region,” Cardin said in a statement.

Abiy Ahmed’s spokeswoman Billene Seyoum responded that there was “nothing volatile about Tigray or Ethiopia. The federal government is well equipped and able to restore order.”

A spokesman said the government will investigate any reports of atrocities or mass killings, but rejected independent investigations as long as Ethiopia is able to do them itself.

Civilians fleeing fighting in Tigray witnessed bombing by government warplanes, shooting on the streets, and people being hacked to death with machetes. A U.N. team that attempted to approach the refugee camps earlier this week was shot at and the areas remain off limits to aid agencies.

Massacre in the church of Medhanie Alem Gu’etelo, on the parish’s most important day of the year, the Festival of Jesus the Savior of Gu’etolo