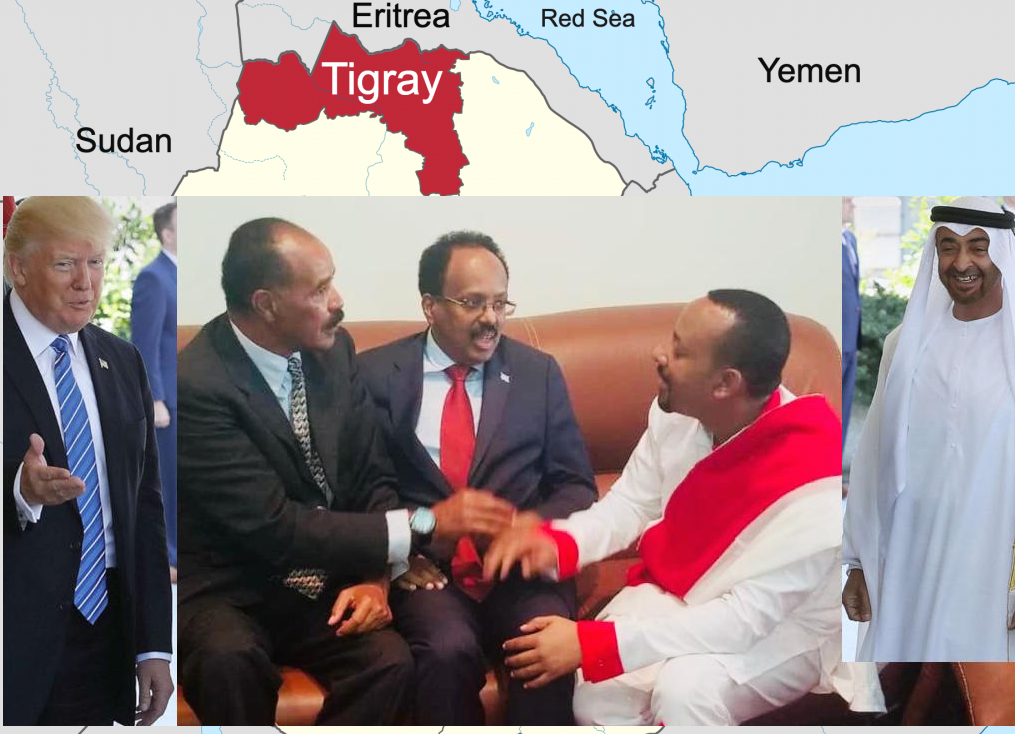 A clearer picture is coming out about the design and the involvement of different countries in the war on Tigray. The United States, Djibouti, Somalia, United Arab Emirates, Amhara, Eritrea are involved in or have shown support for the war on Tigray. Sudan has its own unique position. Why and what do they gain? We try to sketch out that here.

The United States under the Trump Administration has supported the war on Tigray in different manners. It outrageously blamed Tigray for starting the war and attacking Eritrea, but kept quiet on Eritrea’s involvement in the war on Tigray and the ongoing crimes of atrocities. Instead of calling for ceasefire, relevant USA officials are reported to have said “give war a chance” and have been seen going extra miles to support Eritrea and Ethiopia for their war on Tigray and to cover up the atrocities. There are two reasons for this. One is that Tigray is, for them, a small collateral damage in the geopolitical war with China whose influence in Africa they want to halt. The second is that in order to create a puppet Ethiopian leadership that they control, the experienced and resolute Tigrayan leadership needed to be eliminated.

Amharas involvement in the war on Tigray is multi-faceted. It is to massage a wounded ego, to eliminate political opponents, to dismantle the federal political order, to exalt unjustified revenge, to annex Tigrayan lands and to subdue and eliminate Tigrayans in order to appropriate Tigrayan history and heritage as Amharas’.

Eritrea, as is very well known now, has been part of the design and planning of the war on Tigray. Before the war, Abiy Ahmed visited Sawa military camp in Eritrea, and Isaias Afewerki visited the Ethiopian Air force. Eritrea has been more involved in Tigray by releasing press releases and denigrating Tigray way before the war. For Eritrea, Tigrays has been the sing most important politics for the last 30 years. Eritrea now occupies a large swath of Tigray and is forcing Tigrayans in many occupied areas to adjust to life as Eritreans including changing their currency and taking Eritrean identity cards. Very interesting is that Ethiopian army and civil leaders are not allowed to set foot in several Eritrea-occupied Tigrayan lands. That is also one reason why humanitarian organizations are not allowed access to many areas in Tigray where the Eritrean army is present.

Also very interesting is that the Prosperity Party puppet interim Tigray administrator, Mulu Nega, has, in a meeting with Mekelle University community, said that his administration has asked the federal government to tell Eritreans to withdraw from Tigray, but that the country lacked the military power to force the Eritreans out of Tigray. The commander of the Northern Command said a similar thing about the involvement of Eritrea in the war and blamed for the existing weakness of the Ethiopian army not to be able to deal with the Eritreans on Tigray.

What is Isaias promised by Abiy Ahmed for his huge role on the war on Tigray? Could it be all the Tigrayan lands that the Eritrean army is occupying now or has something gone beyond what Abiy Ahmed wanted? The idea of ceding Tigrayan lands to Isaias in exchange for some form of ownership of Assab port is not new. Recently, a prominent Ethiopian politician who was also nominated by Abiy Ahmed for for membership in Abiy’s Truth and Reconciliation Commission said that ceding Tigray (excepting Adwa and Aksum for sentimental reasons) in exchange for Assab is one option.

Sudan’s head of the Sudanese Sovereign Council, Abdel Fattah al-Burhan, visited Addis Abeba on the first of November, two days before Abiy Ahmed declared the war on Tigray. Al-Burhan reveals “I visited Ethiopia shortly before the events, and we agreed with the Prime Minister of Ethiopia that the Sudanese armed forces would close the Sudanese borders to prevent border infiltration to and from Sudan by an armed party” .

It is not clear if Abiy meant only the border with Tigray, or all the border including that with Amhara. If Abiy meant only Sudan-Tigray border, then there was either a misunderstanding, or Sudan took the opportunity to take what it considers its own land. If, as al-Burhan seems to suggest, Abiy agreed for Sudan to deploy its troops along the entire border and giving away the long-disputed Al-Fashaga area, Abiy has clearly gave that land away in exchange for support in the Tigray on war. This raises several questions in relation to the Amharas. Did the Amharas too agree to that in exchange for the promise of being allowed to annex western and southern Tigray? If they have not agreed to that, how will the Abiy-Amhara alliance pan out? Or is that done without their consent? If their silence so far, in the face of Sudan taking that area, is anything to go by, however, it seems they have agreed for the deal of giving away Al-Fashaga in exchange for annexing Tigrayan lands.

Why EHRC should not Investigate Abuses of Human Rights in Tigray

Ethiopia: in Tigray, an invisible war