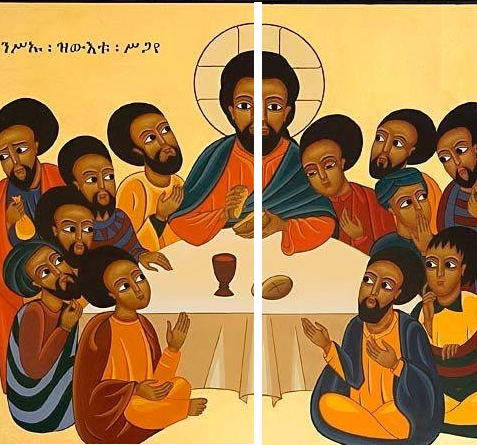 The Ethiopian Orthodox Church based in Addis Abeba and its followers have been behind the war on Tigray. On 17 November, the patriarchate convened in response to Abiy Ahmed’s call for all sections f society to support his war on Tigray. The patriarchate expressed its support. Ever since then, the church has not expressed any concern regarding the destruction of monasteries and churches and the massacres of Christians in churches and outside churches.

As a result of this, a latent schisms between Tigrayan Christians and what Tigrayans call an Amhara patriarchate and associations in Addis Abeba has started to be intense.

Two recordings show the magnitude of the schism. One is of a Mahbere Kidusan meeting in Mekelle. Mahbere Kidusan is a powerful politico-religious association that covertly and openly works for Amhara supremacy.

It is not clear when the meeting occurred, but from the content, it is recent. It is also not clear who is chairing the meeting, but the participants see the chairing people as representative of the Amhara church in Addis Abeba. The Tigrayan participants accused of the association and its members of supporting the war, being a political Amhara association. The Tigrayans said they would not like to be a part of such association any more. Some said they will work to eradicate Mahbere Kidusan from Tigray. The participants also added that, now, there is no Tigrayan that is not aware of the political nature of the patriarchate in Addis Ababa and the church associations, particularly of Mahbere Kidusan, implying no Tigrayan Christian will like to associate themselves with such partisan patriarchate and associations.

Another recording was aired by Mahbere Kidusan youtube channel. Biniam, a Tigrayan member of Mahbere Kidusan talks about the sadness of Tigrayan Christians with respect to how the Church and Christians outside Tigray have reacted to the war and its devastation. He said the Church has lost Tigrayan christians for they don’t want to be a part of it any more.

It is to be remembered that when Ethiopian elders visited Mekelle for supposedly peace talks, Tigrayan religious leaders rejected a meeting with them citing the former had supported the war on Tigray.

A schism in the Ethiopian church is common. There has always been a difference between the Tigrayan churches and the various Amhara divisions. The churches in Amhara have always been part and parcel of Amhara’s political expansion and subjugation of other peoples. It was Emperor Yohannes IV who convened a conference in the 19th century bringing an end, at least temporarily, to the the schism in the church. But those Schism are now on the rise again, as churches in Gojam have resumed their previous ideological beliefs, and Tigrayan Christians do not want to belong to what they consider an Amhara political church.

It is also to be remembered that in 15th century, Tigray monks, the Dekike Estifanos, started a powerful movement opposing new introductions in the church by an Amhara king. Their movement spread to monasteries and churches in all of Tigray and beyond and became a powerful movement that shook the empire. The Dekike Estifanos were eventually exterminated with brute force and barbarity, but they have still fellowship in Tigray, and with current developments, this will likely grow.

Information out of Mekelle after partial reconnection