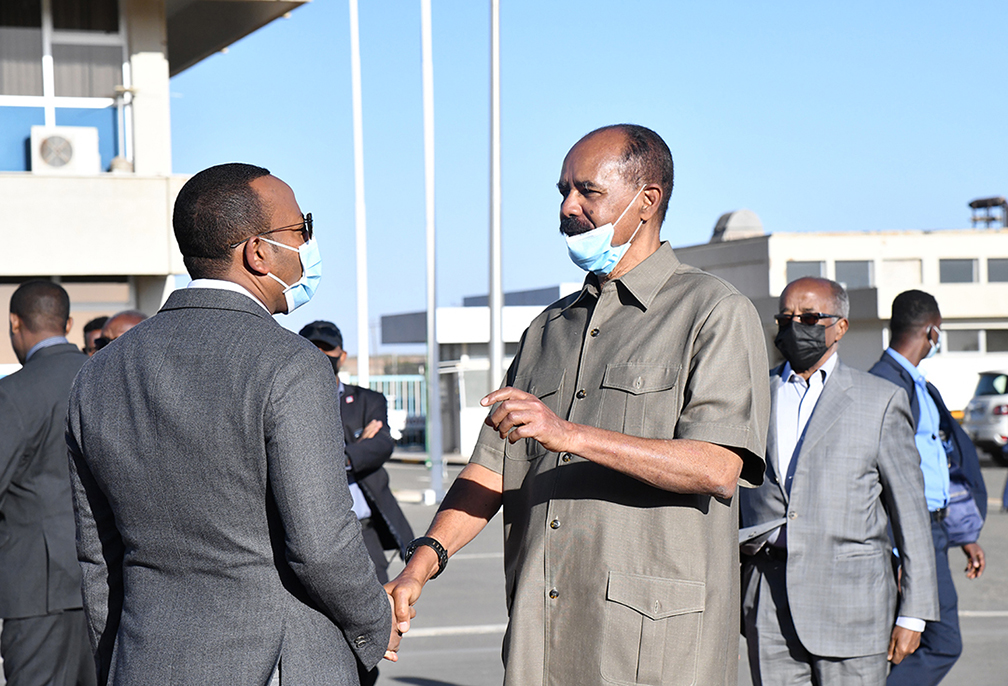 After months of denial about Eritrean involvement in the war on Tigray, Abiy Ahmed and Isaias realized that there was no point in denying anymore what was known to all, and have come up with yet another ploy. Abiy Ahmed made a U-turn on Tuesday and said Eritrean troops are indeed in the border areas of Tigray. This is in itself a big lie given that there is no part of Tigray where the Eritrean army has not reached.

The next day (Wednesday), Abiy Ahmed flew to Asmara and on Friday he announced that they have both agreed for Eritrea to withdraw from the “Ethiopian border”.

Note here that the statement is not saying from Tigray, but just from the Ethiopian border. It is a deliberately vaguely phrased statement. It could as easily be from the border with Afar. What is clear is that this is not an announcement that the Eritrean army will withdraw from Tigray. This is especially clearer when we look at the corresponding Eritrean statement.

The Eritrean press release says nothing about the withdrawal of its army from the “Ethiopian border”, much less from Tigray. It said the meeting was “focused on bilateral partnership and joint strategic development programmes in the offing within the framework of broader regional prospects and perspectives”. It says that within this framework “the vicious military attacks and attendant disinformation campaigns were also assessed in-depth”. Note here by “vicious attacks”, it is referring to what it calls TPLF attacks on Ethiopian forces. The press release says “the two sides agreed that important lessons have been gleaned from temporary hurdles precipitated by this reality that will further bolster the joint undertakings by the two sides in the period ahead”.

Since there is no other joint Ethiopia-Eritrea undertaking, it is clear that this undertaking is referring to the war on Tigray. Eritrea is therefore saying that the two have agreed to intensify their attack on Tigray. Since Ethiopia has also not said Eritrean troops will withdraw from Tigray, but from the “Ethiopian border”, the Eritrean statement is clearer as to what they have agreed upon. Note also that Eritrea has not admitted its army’s involvement in Tigray.

It is foolish to expect that Eritrea will withdraw its troops from Tigray given that these two governments are in a suicidal pact. Eritrean withdrawal means defeat for Abiy Ahmed and they know that well. And they know the international community is nowhere close to being serious about the war on Tigray.

The war on Tigray is expected to intensify now that Abiy Ahmed and Isaias believe, and rightly so it would seem, that the international community has fallen for their umpteenth deception and they have bought time. Eyewitnesses are reporting massive Eritrean troop movements into the interiors of Tigray. Many of the Eritrean troops that have been in Tigray have been given Ethiopian identity cards, and have switched to Ethiopian military uniforms.

The most likely scenario will be to deploy some token Amhara militia to the border for international deception and to let Eritrean and Ethiopian forces continue their genocidal war on Tigray. Amhara militias know that Eritrea is their ally and they will let Eritrean troops pass into the interiors of Tigray. Since the international community is way behind in this game, and since there is no verification system, Abiy and Isaias will say “see there are Ethiopian troops on the border”. I believe that is what the Eritrean statement is saying: “the two sides agreed that important lessons have been gleaned from temporary hurdles precipitated by this reality that will further bolster the joint undertakings by the two sides in the period ahead”.

We should also remember that two days earlier, Abiy Ahmed told ‘parliament’ that Eritrea will stay in Tigray and that his government can not be compelled to provide protection to Tigray.

So what is the fuss about Eritrea’s withdrawal from Tigray?

We don’t find it in the press releases of the two governments. Why are then many media outlets reporting about Eritrea’s withdrawal from Tigray? It is simply based on the assumption that the phrase “Ethiopian border” in Abiy Ahmed’s statement is referring to Tigray. That is all.

Abiy Ahmed and Isaias have taken the international community for a ride for a long time starting from the pact against Tigray which they sold as an Ethio-Eritrea peace deal. Every time there is international pressure, Abiy Ahmed comes up with some lies and deception and the international community and media keep falling for it. The partial (partial because Abiy said Eritrea is only in the border) admission by Abiy Ahmed of Eritrea’s involvement well-coordinated with the release by the Ethiopian Human Rights Commission of atrocities by the Eritrean army is meant to redeem Abiy Ahmed and to buy them time to execute the genocidal project in Tigray.

Abiy has successfully lied about how the war on Tigray started. He also lied about the objective of the war saying it had “clear, limited & achievable objectives”. We know now that it is a genocidal war involving war crimes, crimes against humanity and massive ethnic cleansing.

Abiy also lied that the war was over in November, but we know the war was raging, it is raging and will continue to rage. But he succeeded to deceive the international community, the gullible media, and many incredibly shallow analysts who take Abiy’s lies and deceptions as truth.

Abiy denied Eritrea’s involvement until it was impossible to keep denying, but even then he admitted to it only partially. He blatantly lied saying not a single civilian was killed during the war while tens of thousands have been massacred.

Abiy’s grand lies are always to deflect international pressure and they have always worked for him. There are no scruples when Abiy lies, and surprisingly there are still media outlets, shallow so-called analysts, international organizations, and diplomats who accept his lies and deceptions.

Tigray can’t wait and the international community has a responsibility to act. There should be a UN-mandated commission to oversee the withdrawal of Amhara and Eritrean forces, and the investigation of atrocities in Tigray.

Gebrekirstos Gebremeskel is a researcher, runs http://mermru.com (NLP resources & tools), and manages Tghat. He is interested in science, history of ideas and the politics of the Horn.

The Horn of Africa Civil Society Forum Report on Tigray

Tigrayan Massacres in Chronology and the Emerging Picture of Tigray Genocide