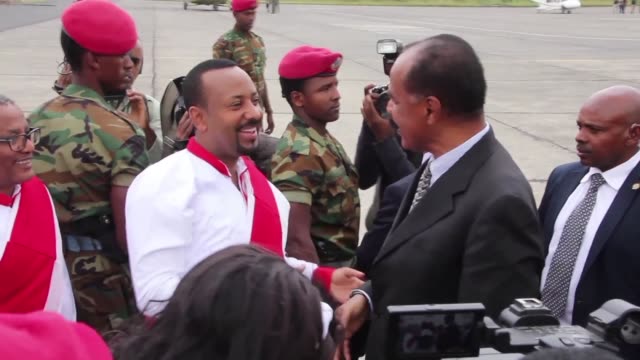 Editor’s note: The author of this article is a professional who had witnessed the war in Shire and previously sent us this account and photos and images which we published here.

It has been almost five months since the Ethiopian army, the Eritrean troops, and other paramilitary actors from Amhara and other regions of Ethiopia waged a genocidal war on Tigray. The Tigray genocide is unique in that the state invited all actors, including foreign troops, to commit genocide on its own people. Abiy Ahmed himself confirmed the involvement of the Eritrean, while Somalian troops were allegedly involved and South Sudan was asked to contribute troops.

Genocide is not an end by itself; it is committed with an intention to achieve something. The perpetrators commit genocide because the end goal they have in mind might not be achieved unless the group they believe that hinders this is destroyed. The purpose of the genocide of Armenians in Ottoman Turkey was to change the demography and create Muslim majority; in Rwanda, the motive was power consolidation.

Since 2018, Abiy’s government has been taking different measures against the people of Tigray. TPLF was scapegoated for any mishap; and the government arrested political figures of the people of Tigray, under the guise of human rights violations and corruption. Abiy even went as far as producing false documentaries such as ‘ye fitih seqoqa’ narrating that Tigrigna speaking people were committing human rights violations and corruption, and aired through all television stations, which resulted in further calamities of innocent Tigrayans.

While warning the people against electing their leaders, Abiy prophetically hinted at what we witness today: mothers crying, the youth dying, properties being demolished.

People from Amhara blocked a highway connecting Tigray with Addis Ababa to prohibit logistics and food from going to Tigray for almost three years. This was done with the intention of exterminating the people by using hanger. Tigray repeatedly called for the federal government to open the road, but the federal government gave a deaf ear.

The tripartite actors in the genocide in Tigray have their own end goals: Abiy Ahmed’s personal quest for kingship; Amhara expansionist elites’ lust for land and detest for multinational federalism; and Isaias Afwerki’s agenda for building an Eritrean identity.

Abiy Ahmed, after he was appointed as the prime minister of Ethiopia, said that his mother had told him that he would be the 7th king of Ethiopia. In his words:

When I was seven, my mom told me that I am the seventh king of Ethiopia. This was etched in my mind. In elementary school, I was known as a king. Everything I read and did was on the assumption that kingship will come…

Leaving the truthfulness of the statement aside, this speech is a clear indication of Abiy’s desire to be a king. His subsequent actions corroborate this all the more.

Abiy, being a king who grants or denies power, reshuffled his cabinet more than five times in three years, some of them within months. Against the constitution, he directly appointed presidents and other officials of most of the federating states. The current president of Somali region was appointed by Abiy, after the former president was thrown to jail through a military operation. He has appointed  presidents of Amhara regional state, Ambachew Mekonnen, Temesgen Tiruneh and Agegnehu Teshager at three different points in time.  Abiy himself admitted that he had appointed General Asamnew Tsige, as a security head of the Amhara regional state.

For a king, the beauty of his castle comes before the lives of his people. Abiy was beautifying his castle when millions are suffering.

A king does not want elections. He promises to conduct democratic election, but he does exactly the opposite, presumably guided by Machiavellian tactics he draws from his book-‘Erkab ena Menber’. Having postponed the 2020 elections indefinitely, external pressure seems to have compelled Abiy to conduct it this year. However, he knows that ‘the only way to win the race is to run alone,’ and he has canceled 26 major opposition parties, and arrested political figures.

A king does not know friendship; only subjects who prostrate. Abiy has crippled and debarred Lemma Megersa, his friend in crime, from the game. The public is left to assume that the high profile assassinations of General Seare Mekonnen, Dr Ambachew Mekonnen, Br. General Asamnew Tsige, Hachalu Hundesa and others have to do with the same motive.

As a king demands complete submission, Abiy warned the people of Sidama, following the military operation in Somali region, that they would face the same if they continued to protest.

The Amhara expansionist elites have dual goals:  insatiable thirst for land and detest for multinational federal system. The former is not limited to Tigray; the Amhara elites claim land from all neighboring regional states and countries: Afar, Benishangul, Gambella, Oromia, Tigray and Sudan.

The Amhara police force and militia killed, forcefully expelled, and raped Tigrayans in order to take the western and southern parts of Tigray. After evicting the Tigrayans from the southern and western Tigray, the Amharas have established their zonal administration. A new zone called “North Gondar Zone” has been established, and ID cards have been issued to the people. The Amharas have committed genocide and ethnic cleansing to achieve this expansionist goal.

The Amhara elites also hold strong grudge against Tigrayans because the latter, in collaboration with other nations and nationalities in the country, established a multinational federal system. Tigray takes the lion’s share in giving recognition to the nations, nationalities and peoples of Ethiopia and in providing a constitutional guarantee, which enabled them to enjoy their own language, culture, and self-administration. This, in effect, destroyed the Amharaization project that was built over decades through assimilation or coercion, including by genocide. This drove the Amhara elites to commit genocide on the people of Tigray.

Isaias Afwerki’s motive in the Tigray genocide is also twofold: his agenda of building an Eritrean identity and his grudge and resentment stemming from his defeat in the Ethio-Eritrean war in 1998-2000.

This article touches on the former. In fact, some argue that Isaias believes that Eritrean nationality can be built only if Tigray is rendered weak. One assumption is that a strong Tigray may attract Tigrayan Eritreans. Another reason is the threat of national awakening among different tribes in Eritrea that may lead to a quest for self-determination.

Throughout history, Tigray has never accepted any decision that takes away its right to self-administration, one of its core values and a reason for repeated fighting followed by victories.  Looking at only the recent ones, Tigray fought against the repressive regime of Emperor Hailesillasie in 1943 and asked for self-administration and territorial sovereignty. When it lost battles to the rebellious Tigrayan fathers, the regime used British Royal Air Force’s to bombard them.

The Derg, a socialist government, was so oppressive that it begot another rebellion in 1974. Through a long and arduous struggle, people of Tigray won and enshrined the right to self-determination in the 1995 FDRE constitution.

Once more, Abiy Ahmed waged war against Tigray only because it refused to postpone election beyond what the constitution allows, and conducted its periodic election. As a signature of defiance against unconstitutional power consolidation, centralization and to signal the core value of self-determination, more than 2.7 million Tigrayans voted in the September 2020 election. Tigray established a legitimate government.

Immediately, they fabricated another fake news: They said that Amharas were massacred in May-Kadra. While it was verified by many international organizations including the Amnesty International that Tigrayans, not Amharas, were massacred in May-Kadra and other parts of Tigray, the government intentionally echoed otherwise in the former. This was intentionally made to win fanatical supporters from the Amhara elites. The Amhara Special Forces and militias have mercilessly committed genocide in Tigray.

The government orchestrated different fake news to boil the blood of the actors and instigate the genocide. As if the Ethiopian army and the Amhara forces were not cruel enough, the Ethiopian government invited the Eritrean forces, Somalian troops, other regional paramilitary actors, and used UAE drones to commit genocide on its own people. In this genocidal war, tens of thousands of civilians have been killed, thousands have been raped, and Tigray’s wealth and cultural heritages have been looted, crops and houses burned, and UNESCO registered historical sites have been destroyed.

Moreover, the perpetrators are using famine as a weapon to exterminate the people of Tigray. As a result, many are dying by hunger and lack of medical facilities. The government has executed the peoples’ emblematic figures, among many, the former Foreign Minister of Ethiopia, Seyoum Mesfin and his comrades.

A glimpse into the much-hyped food aid distribution in Tigray