For the last few years, political tensions have been simmering across Ethiopia due to competing political visions and narratives and sharp disagreements about the past, the present and the future of the country. Those tensions eventually boiled to full-fledged war, when on November 04, 2020, Ethiopian Prime Minister Abiy Ahmed Ali – claiming that the Northern Command of the Ethiopian National Defence Forces based in Tigray were pre-emptively attacked, launched a military campaign against the Tigray People Liberation Front (TPLF) and its leadership. The military operation initially labelled by the Ethiopian government as  ‘law enforcement’ brought together a disparate band of actors – the Ethiopian National Defence Force, the Eritrean Defence Forces and the Amhara Regional Forces.  What materialized was  a full scale to campaign of destruction resulting in what the patriarch of the Ethiopian Orthodox Tewahdeo Church – alongside other notable international observers –  have called a “genocide” designed to  wipe out Tigrayans.

This campaign  is now in its eighth month. From the outset, reports trickling out from underneath the draconian communication blackout imposed by the government, revealed extensive human rights violations and atrocities against civilians. Thousands were displaced and massacred,  women and children raped, aid blocked from reaching millions, heritage and religious sites desecrated, critical infrastructures and refugee camps  targeted and destroyed. These atrocities and the magnitude and total nature of the war directed against Tigrayans, their culture and identity shocked the world. In the words of the United Nations and human rights organizations, atrocities against civilians are described as cruel and “beyond comprehension”.

In light of all this, the persistent and sustained  ideological and religious support given to the war by Ethiopian religious leaders and influencers, has been one of the most troubling elements of this brutal conflict. Most prominent in this regard  have been the significant numbers of  evangelical Christians who remain some of the most vocal proponents, cheerleaders and advocates for the war, even now.

“Blessed are the warmongers”

Evangelical Chrisitians came out in support of the war the Ethiopian government launched on Tigray from the start. In the first two weeks, gospel singers, influential figures and pastors  enthusiastically took part in  a social media campaign calling Ethiopian to  stand with the Defense forces against Tigray in what was essentially a civil war. Ironically, even the country’s reconciliation commission,  made up of the country’s top religious leaders, including evangelical leaders, joined the public endorsement of violence and death. It bears noting that there  is of course nothing  wrong with Christians to publicly display patriotism. Such enthusiastic support and war mongering in the context of a civil war where millions of fellow members of the Ethiopian religious institutions – brethren in faith and citizenship – are subjected to death and destruction was not only in bad taste but  unethical and clear contradiction of Christ’s teaching of being peacemakers.

“Blessed are those who rejoice in the destruction of a city”

The euphoria that followed when the federal government announced the capture of the regional capital Mekelle was unparalleled in the recent history of the country. Prior to the capture, a top army general warned residents of Tigrayan capital, Mekelle – a city of a half a million people – that there would be shelling and that “there will be no mercy”. While millions of Tigrayans across Ethiopia and the world  waited with deepest dread and grief to hear about the news about their loved ones in Mekelle and across Tigray, their  Christian brothers and sisters were out on the streets cheering and jubilating the fall of the city. The former Ethiopian Prime Minister, Hailemariam Dessalegn, who professes a Christian faith,  wrote at the time “Praise God for his mercy upon us” – a twisted but befitting doxology for a city that was shown no mercy.

“Blessed are those who pronounce Christian fatwas”

In the course of the current war in Tigray, Evangelical Christians continued to play an active role in providing religious justification for the war. Weeks into the conflict, ‘prophecies’ about the capture of TPLF (Tigrayan) leaders  circulated on social media. A prominent theologian and preacher with thousands of followers on social media wrote that “what is happening in Tigray is God’s judgement” a warped theology that portrays God as the author of death and suffering. The idea that God delights in the death of the innocent is anathema to the central teaching of Christ who came not to judge but save the world. The same person also wrote that “to be a Christian and support the TPLF is similar to becoming a drug-dealing Christian” conflating religious and political convictions.

“Blessed are those who go extra mile to deny massacres”

Three months into the war, a prominent theological scholar wrote an op-ed, denying the massacre of hundreds in the city of Axum. The massacre, as it turned out was not only true, but also referred as as “ranking among the worst documented so far in this conflict” was perpetrated by Eritrean soldiers and verified by Amnesty International, who had interviewed 41 survivors and analysed satellite images. The author, in the name of being objective and providing context, wrote a diatribe about how evil  the TPLF is and justified the “law enforcement operation” of the government. While this Op-ed posed as a critical query into media claims – which is an essential and legitimate task – what it ended up being was a blanket denial of an atrocity crime and “whataboutism”. Political considerations or past injustices, however, cannot justify massacres, rape, and the use of starvation as a weapon of war nor can it excuse using assymetric access to media and information to gaslight and to silence Tigrayans speaking out about atrocities being committed on thier families.

“Blessed are those who suppress the critics”

One particular phenomenon that has emerged in the course of the war is the use of prophetic messages and scripture either to silence critics of Abiy Ahmed or portray him as a victim of international pressure. Once videos and reports started to emerge, war crimes and atrocities committed by Ethiopia defense forces, Amhara regional forces and Eritrean defense forces became untenable. The pressure from the international community increased. Tigrayans as well as concerned citizens both at home and abroad started to criticise Abiy Ahmed and his war policy. In the midst of this rising criticism, evangelical Christians began misquoting Romans 13:1 to silence any legitimate criticism of the government. Moreover, some went an extra mile to portray anyone who dared to criticise Abiy as having the spirit of the Anti-Christ. Still others used scripture to portray Abiy Ahmed as king David who was distressed by the rousing anger of people.

“Blessed are those who denigrate bearers of God’s image”

In addition to offering  justifications, ideological and theological support and religious legitimacy including to the proof-texting and misinterpreting the scriptures, Christians have also failed Tigrayans by ignoring and contributing to the hate rhetoric against them.

In the first instance anti-Tigrayan othering  and “us” ”them” rhetoric  ramped up to alarming degrees in the last three years. However, the church kept silent. This is a grave failing by omission. But beyond the silence, religious figures have since the start of the war come out into the open with hate speech against Tigrayans. A prominent scholar and theologian who is a visiting Assistant Professor at a reputable Christian University in the United States recently called Tigray a “curse” that should be allowed to “go to hell”. 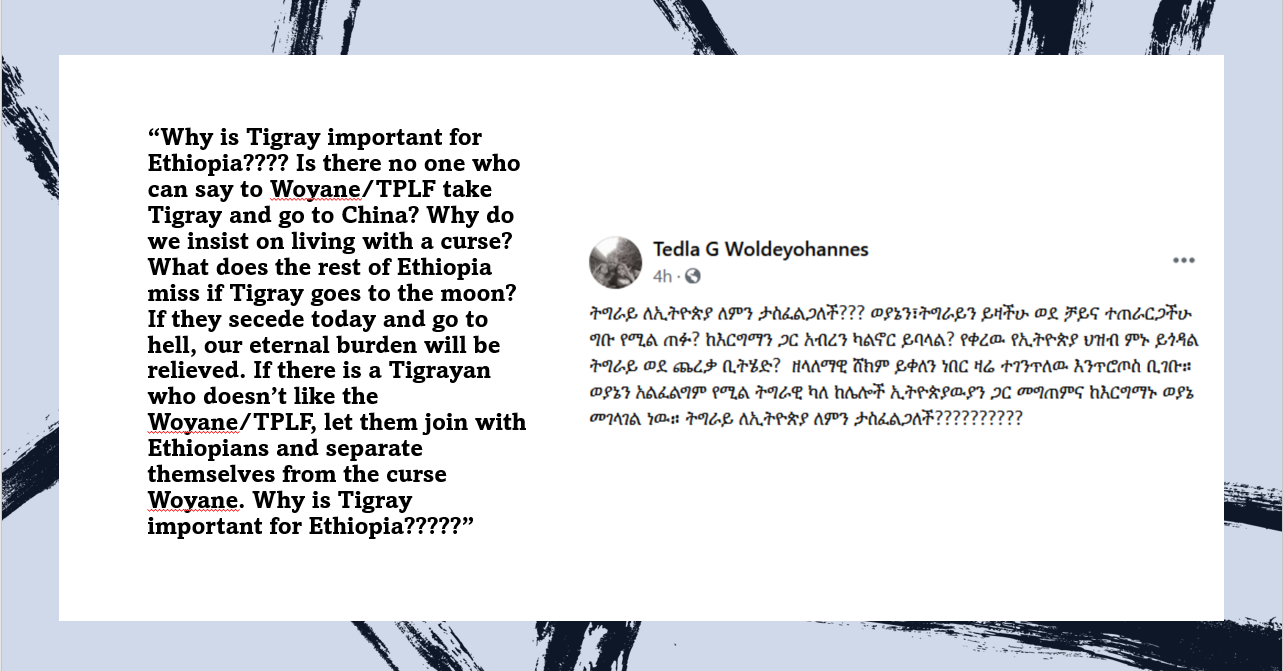 A Christian television transmitted the “exorcism” seen in the clip below which directly and openly demonizes Tigrayans and Tigray. The video shows a woman “possessed” by a “spirit” that has been killing and attacking the Ethiopian national defense forces in Tigray and is aiming to destroy Ethiopia. In a bizarre and worrying coincidence another video of “exorcism” openly demonizing Tigrayans has surfaced in Eritrea.

The critical question is what would Jesus do about the war in Tigray? More importantly, why do evangelical Christians, who claim to worship Christ Jesus – who has taught his disciples to be peacemakers, love their enemies and modeled a life of servant – chose to side with the state that is determined to wipe out Tigrayans and collaborated with a foreign army to bring death, destruction and despair to millions? The Evangelical tradition in Ethiopia prides itself as bible-centered, and as focused on personal renewal and insists and claims to offer the promise of eternal life – but its silence and outright complicity in the current war on Tigray has only brought the thin foundation of its social ethics to the fore. Jesus Christ, the Good Shepherd, came to seek and save the lost, not to steal, destroy and kill – and it is imperative for his disciples to follow his footstep and stand in solidarity with all who suffer. In the midst of war, the spiritualization of politics and the politicization of religion should be tamed before it engulfs the whole country. Ethiopians of all persuasions bear the image of God, regardless of where one stands in the current politics – all deserve to be treated with respect and dignity.

Temesgen Kahsay is an assistant professor at the Norwegian School of Leadership and Theology. His area of research is the intersection between religion and society, religion and culture and the role of the religion in the contemporary local and global contexts.