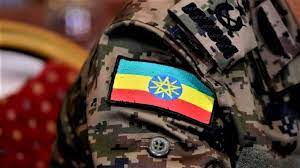 These are another set of graphic images obtained from the phone of another Ethiopian soldier stationed in Tigray, at the time. Tghat obtained these images before the recapture of Mekelle by TDF. Like the previous set of images, these images are testament to atrocities in which this soldier took part.

We share these images as further evidence of the grave atrocities committed in Tigray by the Ethiopian National Defense Forces. We remain aware that the perpetrators of these atrocities including the soldier who took these pictures operated with full impunity and to date there has been no effort to ensure accountability.

The first set of images represent the aftermath of an unspecified massacre where it seems a group of civilians – young men were killed by what are ENDF soldiers, as identified by the uniforms.

The second set of images are distinguishable from the first because they seem to be from a different location. We see a larger number of soldiers here and stoning seems to have been used. Again the victims are young civilian men – suggesting that this demographic was particularly targeted for killing by the Ethiopian soldiers.

The final image we share here is a personal one. We share it only because it likely identifies the owner of the phone. We have edited the face of the woman in the picture in respect of the privacy of a third party.

Twitter ought to Suspend Abiy Ahmed from its Platform