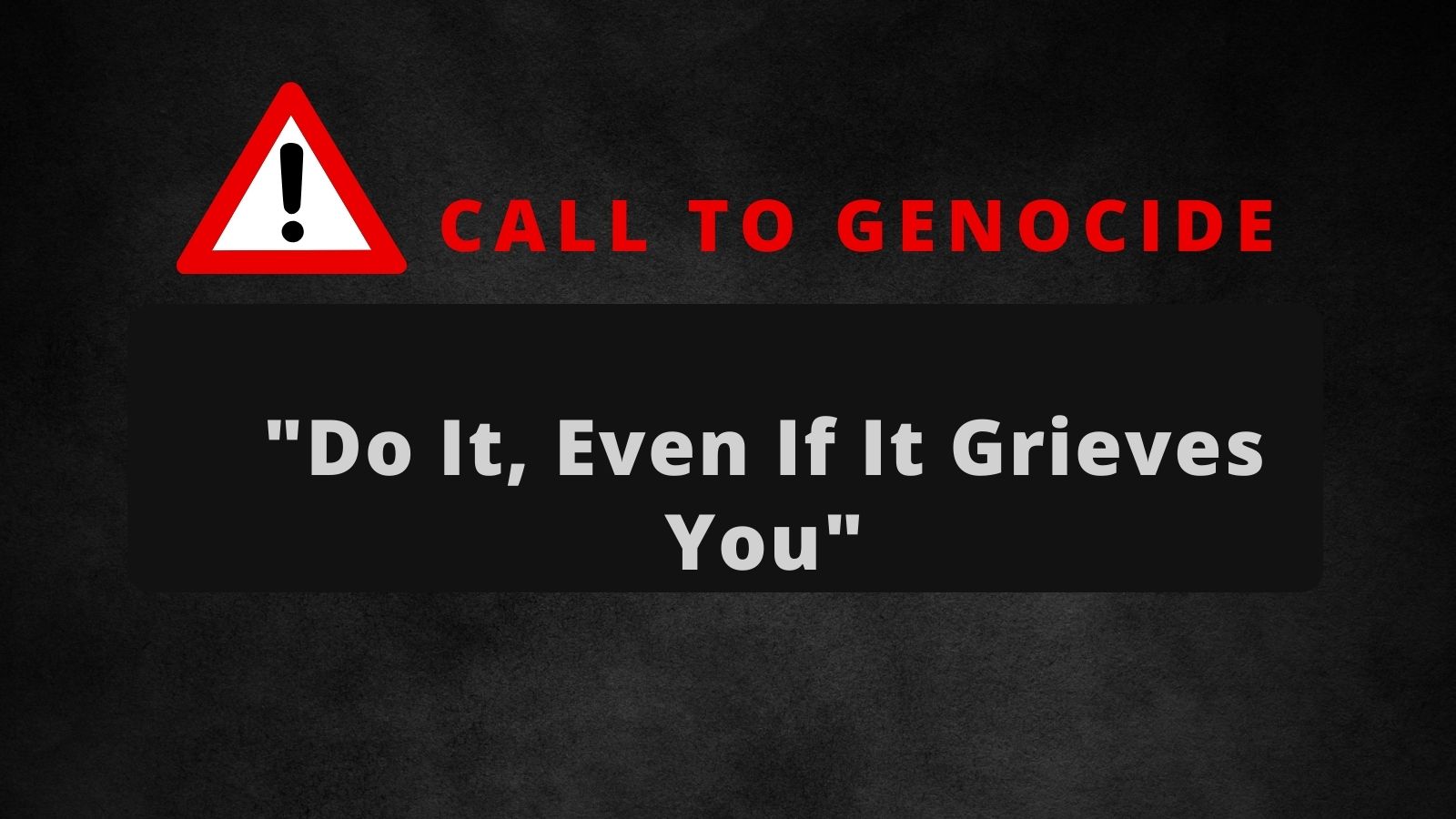 It has been almost a year since Nobel Peace Prize Winner Prime Minister Abiy Ahmed along with his Eritrean and Amhara allies launched a war against the Tigray region. Although cast by the Ethiopian regime as a “law enforcement operation” and by the international community as an unfortunate but almost inevitable military solution to political differences between Abiy Ahmed and the governing party of Tigray, the Tigray People’s Liberation Force (TPLF) the war has proven to be a genocidal campaign intent on decimating Tigray and to “wipe out” Tigrayans.

Over the last year, the world has been shocked by the constant stream of revelations about the atrocity crimes that have been committed in Tigray, including dozens of massacres of innocent civilians, weaponized sexual violence on an industrial scale, systematic destruction of the Tigrayan economy, and livelihoods, as well as ongoing siege and total blockade of humanitarian operations orchestrating man-made famine that has put millions of people under imminent threat of starvation.

A persistent backdrop to this long list of war crimes, crimes against humanity, and acts of genocide committed in Tigray thus far has also been the ethnic profiling, harassment, arbitrary mass arrests, extrajudicial and mob killings of Tigrayans living outside of Tigray, in the rest of Ethiopia. Although these have all been reported upon by Human Rights organizations and the media several times, thus far the treatment of Tigrayans outside of Tigray has always seemed to pale in comparison to the atrocities being visited on Tigray itself. This, however, seems set to change in the most horrific way possible with the intensification of inflammatory speech and incitement to genocide over the last days and weeks.

The continuous drumbeat of hate speech and genocidal rhetoric that has accompanied the war and fuelled atrocities in Tigray seems to now be heightening to a feverish pitch and is focusing on Tigrayans in the rest of Ethiopia. This direction has particularly been evidenced in the seemingly concerted campaign inciting government action and vigilante attacks on Tigrayans that has followed the most recent military setbacks faced by the Ethiopian federal troops and allied Amhara regional and irregular forces.

Incitement to Violence and Genocide

A cursory look at the barrage of posts recommending measures against Tigrayans across Ethiopia, which mainly erupted on Facebook on the 30th of October 2021, suggests that the initial post that seems to trigger others (or possibly intentionally starts a preorganized campaign) is one by ESAT journalist Messay Mekonnen, infamous for making the call to “drain the sea to kill the fish” – i.e. eliminate the Tigrayan people.

Of particular note is the last paragraph which partially reads as follows:

Urgent Message to the Government: It is not too late. It is necessary to intern everyone of Tigrayan descent, even if they have no connection with TPLF, in temporary camps. During the Second World War, the United States was able to win the war against the invading Japanese forces and Hitler’s army only after interning all Japanese citizens living in the country in camps. Ethiopia is now facing even more imminent danger. It is widely believed that the main actors in the struggle for Dessie are TPLF supporters living amongst the people. It is impossible to win the war with them in our midst. This step should be taken urgently, including for their own safety.

An earlier version of this post actually used the term concentration camp.

This was immediately picked and amplified both by other Facebook accounts with large followings and in telegram groups.

Soon after this other posts began to appear alleging that recent military setbacks suffered the allied federal and Amhara forces in and around Dessie and Kombolcha towns were orchestrated by Tigrayans residing in those towns. Yesuf Ibrahim, vice chairman of the National Movement for Amhara (NaMA), recently appointed by the Mayor of Addis Ababa as Head of Government Property Administration Authority for the city claims that the people of Dessie were living with more than 30,000 TPLF sympathizers – a sort of fifth column responsible for all military losses including alleged attacks targeting himself.

As alarming as these calls were already they only got progressively worse. Possibly the most virulent and explicit call to genocide liked and shared by thousands, was made by Dejene Assefa on Facebook encouraging urgent action “even if it grieves you.”

Translation: The war is with your long-time neighbor, the person who grew up with you, but who in partiality to his own ethnicity has classified you and your people as enemies. The war is with the traitor who you raised and fed. The war is not only with the invading Junta from Tigray, but with the spy and targeting officer next to you who desires your death and is eager to drink your blood. The war is with an enemy close to you sitting in Ethiopia’s cities collecting information and raising funds to send to your killers!!! The war is with the person in your neighborhood who drinks whiskey and parties when he thinks your killer has won the war!!!!! If you can clear and control these wild thorns and chameleons in your bosom, do not even doubt that victory is yours!!!! And you know who they are!!! Do it even if it grieves you!!!!! You will not be any crueler than they are!!!! History is going to remember who was cruel, who was a traitor, and who was merciless!!!! Let this be done starting from today in Dessie, Kombolcha, Habru, Addis Ababa, and in every city…. you will immediately see the change!!!! But don’t expect change when you are protecting killers and those who aid and abet your death!!!! Stop being undecided!!!! Since they’re determined to destroy you, prove yourself to be even worse!!!! So hurry up!!!! Hurry up!!!! Hurry up now!!!! Only if you hurry can you save your people from shame and your country from collapsing!!!! This is not more important than your survival!!!! Keep your unity and do this…Ethiopia will prevail!!!!!

Words in red in the image:

Many hours and a large number of reports by concerned Tigrayans later these posts are still all up on Facebook because the social media platform insists that they do not violate its community standards.

While recent revelations have shown exactly how indifferent if not downright complicit Facebook is with the use of the platform to spread this type of virulent messaging in Ethiopia it does nonetheless bears stressing that once again this is happening. It is impossible to believe that so many reports are still being auto rejected, which would still be further corroboration of how unwilling the social media platform remains to address imminent threats to violence in a country that it has already identified to be “in its highest priority tier for countries at risk of conflict.” Even more concerning is if these messages are being allowed to filter through because they pass muster according to the few FB moderators and the “vigilante” volunteers who go on ideologically or ethnically driven mass reporting campaigns.

Sadly, Twitter has not been any more responsive as predictably the calls on Facebook migrated and continue to be amplified on this platform as well.

The following posts are only a few examples from one chain of posts that generated comments like “These are not people they are animals”; “Time to clean up trash” and “No Mercy”.

Even as these posts from yesterday remain up on Twitter, fresh calls are being made this morning.

Report … Pick Up … Help in Cleaning up!!

For one whole year, the world has watched without any meaningful action as horrendous crimes have been committed and the most sacrosanct humanitarian and human rights have been violated with total impunity. This has only served to embolden the Ethiopian regime and its supporters to such an extent that public calls for genocide are being made by social media activists mainly based in the United States and Europe. It, however, remains highly unlikely that these new excesses will raise the international community to act to reinforce its commitments to protect vulnerable communities and to prevent genocide, even if only by holding individuals and social media platforms accountable for the virulent messaging being disseminated.

Interview: An Eyewitness Account of the War on Tigray as Witnessed in Hawzien