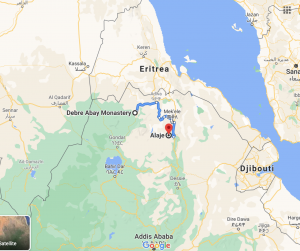 Two massacres have been committed since the start of 2021 by the invading forces on civilian Tigrayans. One of the massacres happened on 5 and 6 January, in western Tigray, in an area called Debre Abay, named after the famous Debre Abay monastry.

First, the Ethiopian and Eritrean military started shelling a small town, called Mai Hrmaz, from far. Houses were destroyed and children killed. When they arrived at the small town, a fight with TDF forces tarted which lasted for two days. According to some sources, around 500 Ethiopian and Eritrean soldiers were killed in the fight. A reinforcement was then asked and sent to the location, but the fight was already over and TDF forces were not in the area. Then the angry reinforcement force took its revenge on the town’s civilian population by massacring 100 of them, looting shops and houses.

Another massacre happened in southern Tigray, in an area called Bora Selwa on 10 January. Here too, the massacre was committed as a revenge for a lose in a battle with TDF forces. An estimated 150 people have been massacred. Tghat has so far identified about 13 of them by name.

The Eritrean and Ethiopian soldiers have shown a consistent pattern of taking out their revenge on civilian Tigrayans. And usually, they target young Tigrayans. The targeting of young Tigrayans is about killing the future of Tigray too. In his Machiavellian-type book “እርካብና መንበር”, Abiy Ahmed details, by taking a lion as an example, how the new king eliminates things that remind of the past and the young of the old king. This is chilling, and I am afraid that is what is being implemented in Tigray.

Who Started the War on Tigray?