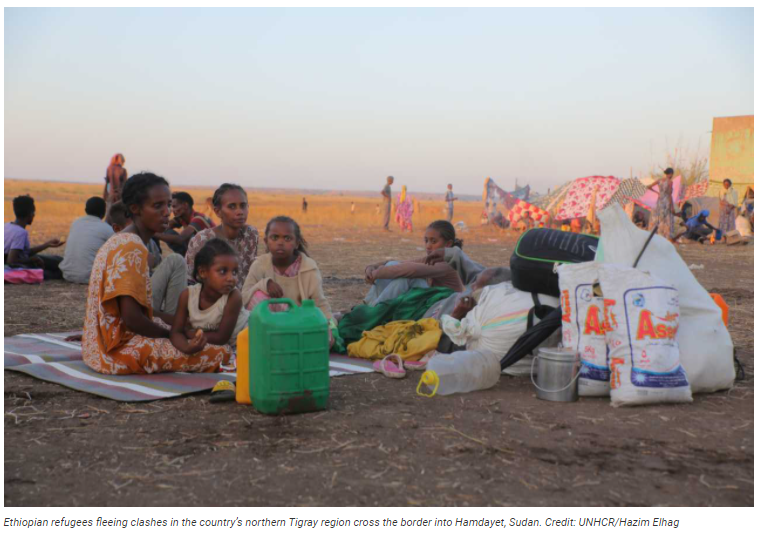 This is a summary from a preprint by Jan Nyssen, which mainly focuses on mass starvation, fake news, massacres and sexual violence, destruction of heritages, international dimension and solidarity works. The paper stressed human rights and humanitarian situations in Tigray remain very bad and getting worse. The international community, including now also France, reacts but so far it remains at the level of “strong words”.

According to the leaked minutes of the Tigray Emergency Coordination Centre (ECC) meeting held on 8 January, the situation is catastrophic, worse even than anticipated. People in Tigray are dying in the streets. Very little is done outside of Mekelle. “We are not able to reach 99% of the people in need”, said the leaked ECC minutes.

Weeks after this ECC meeting, the situation has not improved: In many villages and towns, there are no operating mills so people can’t make bread or injera; people are living on roasted barley and whatever else they can find including branches and leaves of non-toxic thirst-quenching plants in order to have at least something in their stomach.

In Hawzien and Gheralta, where there is ongoing warfare, lots of looting, and damage to some of the historical rock-hewn churches are reported. The army targets every younger man, even in civilian clothes.

In Adigrat, the men have fled to the mountains for fear of being killed. They shelter in caves, gorges and forests, but churches are not considered safe anymore. From there, many join the TDF army.

The situation is well summarised by The Economist articles on 21/1/2021: Ethiopia’s government appears to be wielding hunger as a weapon, on 22/1/2022: After two months of war, Tigray faces starvation; and huge obstacles to deliver aid (see OCHA’s map of the (poor) accessibility for humanitarian aid to Tigray), at least part of it seems also to be forwarded to the Eritrean army.

Lorries with aid are ready for Tigray, but staff needed for distributions is not allowed in the region: “A large number of humanitarian staff are waiting in Addis Ababa, ready to move into Tigray.”

Followers of the Ethiopian government tend to send out messages like: “This peace operation is finished, the government did what it had to do, all is well now”, unlike the reality.

Yet, on 26 January, the EU Joint Development & Foreign Affairs Parliament Committee gave a hard time to the Ethiopian Ambassador Hirut Zemene in relation to the humanitarian crisis in Tigray, who called for ‘perspective’ over the Tigray crisis.

Unlike the disinformation campaign by the government, tworries and pain are confirmed by MSF (Médecins sans Frontières/Doctors without Borders) on 29 January: Ethiopia: “If hospitals can’t be accessed, then people die at home“, and UNICEF on 27 January: 12 weeks into the conflict, ‘deeply troubling’ situation for children in Tigray.

The 15 january statement by EU commissioner Josep Borrell demanding access for humanitarian aid operators was reworded by the Ethiopian authorities as if it’s a simple agreement to scale-up the efforts.

A traumatized US national in an interview (see translation) witnessed killings in Aksum committed by Eritrean forces not only in the church but also in random shootings in the streets, in open shops, in homes.

Killings, looting and coercive «re-identification» as Eritreans are reported in Irob, Tigray. Many have fled to the mountains with only the clothes they were wearing and are hiding in caves. There’s no food, no money.

Daily killings by shootings reported in Mekelle. Military also robs people’s money and mobile phones at gunpoint. Among many others, Journalist Dawit Kebede (Tigray TV) has been shot dead in Mekelle, together with his lawyer, upon release from police custody.

An increasing evidence of rape by Ethiopian and Eritrean solidiers are reported. “This is what Eritrean soldiers usually do, when you do not want to give them your belongings,  they shoot you down on the spot. Soldiers from the Ethiopian army (ENDF) do not loot. But they do rape. They rape women in front of their husbands.”

Very serious allegations of rape are being reported, especially in Mekelle. Military elements are forcing women to trade sex for basic commodities (food, water, toiletries). Men have been forced to rape family members under threat of violence; and there is an increased demand for contraceptives.

Shemelba and Hitsats refugees camps have been  looted and basically destroyed, as also documented by analysis of satellite imagery. The refugees have relocated to the two camps around Mai Tsebri (Adi Harush and May Ayni), they are starved (“we ate what we could find, even plants and leaves”), and others have been forcibly sent back to Eritrea.

Talk of the town, by beginning of February 2021,  are Tigray president Debretsion’s recent speech, and the fear that Eritrea plans to send another 200 000 soldiers for a new offensive with the aim of eradicating all educated men who do not explicitly oppose the TPLF party, in line with Dawit Kebede’s murder. Mulugeta Gebrehiwot in an extremely rare lengthy interview with Alex de Waal on 27 January 2021 has also received attention. Mulugeta says, “They have destroyed Tigray, literally”.

Destruction of religious and cultural heritage

Besides Aksum, Hawzen and Gerealta, and many other churches in Tigray the 6th century monastery of Debre Damo was bombed using heavy artillery and looted by Eritrean troops. Also more detailed information is emerging on artefacts stolen from Negash mosque.

The Ethiopian Orthodox Church is silent on these destructions of its own churches. Patriarch Abune Mathias is reportedly not allowed to issue statements.

An Ethiopian Catholic Church delegation visited its diocese in Adigrat, reporting damages to churches; buildings of Wukro St. Mary’s Catholic College have been broken and looted, with computers stolen. At their meeting with the interim administration, government officials said 4.5 million people needed emergency support all over Tigray.

Such attacks on religious and cultural heritage sites seem to be part of a deliberate attempt to eradicate Tigray as a historical and cultural entity.

The border conflict between Ethiopia and Sudan for the Al-Fashaga triangle continues, with Sudan now controlling most of the area. On 16 January, the participation of Eritrean soldiers on the side of the Ethiopian army was mentioned.

Filling and operation of the GERD reservoir on the Blue Nile is another major source of conflict between Ethiopia, Sudan and Egypt, that has flared up since the Ethiopian army became stretched and weakened due to the war Tigray.

Somalian mothers are protesting because they fear for their sons who had been sent to Eritrea for military training. Reportedly the Somali soldiers have been taken to fight in Tigray, where some got killed. Direct eyewitnesses from Hagere Selam spoke of the presence of Somali soldiers on the sides of the ENDF.

Diplomatic sources mention that there is a risk for an outright regional war in the Horn, involving Ethiopia and all neighbouring countries.

Tigrayan diaspora kids summarise the issues at stake and sing to stop the war in Tigray: We are the world – “a new song”.

The scientists’ appeal : “Tigray (Ethiopia) – In absence of major international diplomacy and rescue, towards a repeat of the great famine of 1984-1985”: by 29 January, 3103 scientists worldwide signed already.

And a recent initiative by younger colleagues: the new broad petition on Avaaz.org “Allow immediate and full humanitarian access and stop starvation in war-affected Tigray” in a dozen languages, signed by 3648 people on 3 February.

In the USA, 420 returned Peace Corps Volunteers published an open letter to the members of the 117th United States Congress, asking for public condemnation of the violence that is occurring throughout Ethiopia and for support to a peaceful resolution to the war on Tigray.

For more detail, we refer the reader to the original work by Professor Jan Nyssen: Let’s be strong, we all Tigrayans suffer together; this too shall pass soon!

Emnet Negash is a doctoral researcher in Physical Geography at Ghent University, Belgium. His research focuses on Modelling topoclimate in northern Ethiopia’s mountains. He is also an Assistant Professor at Mekelle University, Ethiopia.

More than 180, 000 people with noncommunicable diseases in Tigray are either dying at home or in great risk

Eritrea’s Isaias Afewerki – the Thorn in the Horn