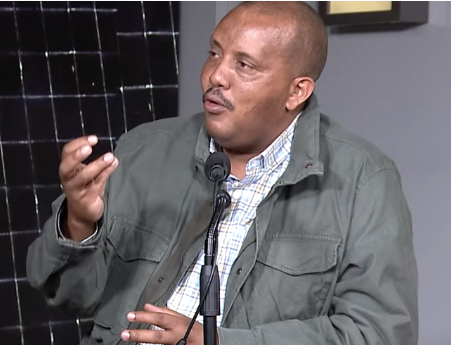 Getachew Reda, a member of the Executive Committee of the Tigray People’s Liberation Front (TPLF), spoke to Tigray Media House (TMH) on Tuesday. He asserted that the war on Tigray is far from being over; that Berhanu Jula, Ethiopia’s chief of staff, is at best a spokesperson of the Eritrean military; that it is up to the people of Tigray, once Tigray is fully free of the invading forces, to decide whether to save Ethiopia; that the existence of Tigray hinges on the struggle of its people and yet international community seems to have better grasp of the war than the rest of Ethiopia despite Abiy’s attempt to use communications blackout as a weapon; that the death of veteran heroes like Seyoum Mesfin makes the people of Tigray stronger and more determined; that it is difficult to consider soldiers merely in their late teens and captured in a battle just 6 days after they graduated as POWs but that they teach them and send them home; and that they continue to give collective leadership and the Tigrayan youth is flocking to the training centers and they are working to start offensive to free Tigray.

The status of war on the ground

Getachew described the claim by Abiy and co that the war on Tigray is over as “wishful thinking.” He observes, “not only wasn’t there a single day where there was no fighting,” but the war is still devastating and many young people are being killed. The invading forces that Getachew calls “Abiy’s fascist forces and Isaias’ mercenaries,” were young people in their late teens recruited from the Amhara region. “The propaganda that the war is over is an attempt to deceive and bring to Tigray such young people and to use them as cannon fodders in an attempt to subjugate the people of Tigray forever,” Getachew explains.

As the war drags on, “Tigray Defence Forces (TDF), together with the people of Tigray, are doing a marvelous job in all parts of Tigray to thwart these futile efforts of the enemies,” he adds.

The main weapon Abiy and co are using is sealing off Tigray and creating a situation where only their story becomes the truth the world hears. They have succeeded to some extent. But the truth escapes in a way they cannot control. Thousands of unfortunate young people are effectively being used as cannon fodders. This is the situation on the ground. As we speak, there is fierce fighting on multiple fronts where Abiy’s and Isaias’s mercenary forces are being killed in the thousands. That they claim the war to be over when the fighting still continues is a joke, and more so when thousands of their forces are being killed.

“In the first place, I don’t believe Berhanu Jula has the moral to say that. It is the Eritrean Generals who are leading the war. At best, Berhanu Jula can only be a spokesperson of the Eritrean military,” Getachew commented in response to recent remarks Berhanu Jula, Ethiopia’s chief of staff, made regarding TPLF.

Getachew shares a story about a young female soldier from North Shewa, in the Amhara Region, who was killed in a recent bloody fighting. He said, “she graduated on January 5, barely six days before the fighting.” This is the story of thousands who, he said, “were wearing military uniforms, but one can’t be sure that they even teach them how to shoot.”

Many of the dead soldiers might not have had the chance to shoot even once as their ammunition was found untouched. “It is heartbreaking to see soldiers who graduated on January 5 and were killed on January 11. And this is only for the sake of Abiy and Berhanu’s nonsensical game.”

When explaining how young people from Amhara and Eritrea were separated from their parents and duped into going to a war that was allegedly over, Getachew says “the Amhara forces were told they would retake land. The case of Eritreans is shocking. They steal old towels, charcoal stoves. They are given all kinds of missions. One can’t be sure how to treat these people.”

“On our part, we are working to halt any movement that threatens the existence of Tigray. The youth from all corners of Tigray are showing solidarity and determination and this should continue. This is not only about freeing our land from enemies. It is an existential threat, and we are working at a level that can enable us to avert this danger.”

Many who know the Tigrayan psyche would agree that TPLF is (one of) the most pan-Ethiopianist force in Tigray. Or at least it used to be. Getachew describes himself as “one of the TPLF leaders who strongly believe that Ethiopia should continue to exist.” When asked if he still upholds that, however, he was “not in a position to talk in public about saving Ethiopia right now, when mass atrocities continue, by isolating Tigray and especially conspiring with an enemy government, to loot Tigray, to destroy its infrastructure, to subjugate and humiliate its people, to quench the Amhara’s capricious greed for land, on grounds of a common enemy.”

Whether to save Ethiopia or not remains to be up to the people of Tigray to decide, Getachew believes. “Our agenda right now, above all else, is to free Tigray from the invasion. Once Tigray is free, we will accept what the people of Tigray choose. I don’t have any substantive reason I can present to my supporters and opponents (in Tigray) whether Ethiopia should continue to exist or not,” he said.

The rest of the world

Reaching the rest of the world has been difficult, if not impossible, because Abiy used communications blackout as a weapon. While admitting that it is very difficult to communicate, Getachew said, “yet with the limited means of communication at our disposal, we are with our supporters – we know we have many supporters, governments and international organizations, because the crimes being committed against the people of Tigray are not simple. They are serious crimes, a big danger that anyone with conscience should condemn. We are working to strengthen our diplomatic ties.” He goes on to underscore that “the primary factor for the existence of the people of Tigray is not the stand the Americans or the Germans hold. It rather depends on the sacrifice the people of Tigray pay to ensure their existence. This is what we see in reality too.”

“The youth are joining our forces from all directions. Last time I was in a remote place. It is amazing how they found out about the training center there; hundreds of youth from Mekelle came for training. When you see them joining us this way, we know this agenda is beyond us. The existence of the people of Tigray depends on the youth who are sacrificing, paying their lives. We are trying our best to communicate with the international community.”

“We can’t say it is sufficient, because we have limitations in the means of communication. Even so, I have confirmed that the international community has a better grasp of the matter than the rest of Ethiopia.”

The killing of TPLF veterans

While killing those who fight in the battlefield is expected, the execution of TPLF veterans like Seyoum Mesfin, former Minister of Ethiopia’s Ministry of Foreign Affairs, was obviously instigated by hatred and, especially that of Isaias’s vengeance, to humiliate the people of Tigray. Getachew observes that “this compels, as it is practically observed, the people of Tigray to be strong and determined instead of humiliating them.” He exemplifies this.

“As I told you, the Eritrean troops are stealing. There is one ‘division’ engaged in looting. They steal charcoal stoves. They even steal dirty handkerchiefs. It is shocking. When they come, they think that it would be a walk in the park. But two battalions are being destroyed in a single battle. It is the angry people of Tigray who are doing this. Everyone should know that the people of Tigray will never be subjugated.”

When explaining how the TDF treat and why they always release their POWS, Getachew said, “we don’t have any problem with the individual soldiers. Berhanu Jula and co told them TPLF was destroyed, and they thought they were sent on a peacekeeping mission. One of them told us he had been sent for peacekeeping. He said he had heard about junta recently.”

In what seems to indicate a deliberate duping of the new recruits, “they are made to imagine that they would be looking for a powerless beast called junta,” says Getachew, who repeatedly expressed sympathy for “the ones who die in mass.”

When possible, “we would kill only the military officers,” Getachew said. When the poor young soldiers are held captive, they teach them and release them.

“Let me tell you a story. There was a female soldier who didn’t know that she was in a war and that she was a POW. She asked people to help her find money and a cell phone that she had lost. Nobody, in their normal conscience, would harm such an innocent person. So when they surrender, we teach them and send them home. Now it is also hard to feed them. We share with our people what they have.There is no reason to hold these young people as POWs only because Abiy and Isaias sent them. We teach them and release them.”

“Thousands of POWs from the northern command whom we held captive, fed them and set them free come on the media and boast that they broke a prison. They come and we capture them again. Sometimes it is annoying. I am surprised how disciplined our forces are. You hear someone you just gave mercy boasting again. Well, not everyone is supposed to boast. They come back and you find them again. We couldn’t release the full story because there was an extensive campaign to block our means of communication.”

Military and political status of Tigray

According to Getachew, the leadership of the government of Tigray makes regular evaluations. When asked if there was recent reshuffle in the TPLF leadership, as rumors have it, Getachew says, “it is not the right time to make leadership changes. Nor do we believe that it is necessary. We give collective leadership.”

To spare the urban centers from being battlefields, the government of Tigray does not “hurry to free cities and towns now,” Getachew says, as “our cities are ours; they won’t go anywhere.We know that our land will not remain occupied merely because some arrogant group says it has annexed it. In this regard, you will see changes soon. We will continue to work this way.”

Getachew hints at how bloody the war has been when he mentioned that “around a hundred thousand or more people have died so far. These are all military staff perishing.” The tragedy of Abiy’s control of the story, in Getachew’s words, is that “nobody audits. The people should ask where their children have gone.” He says, “Sometimes I wish we could fix our media and tell the names of the dead to the people so that the families do not send another child to die in vain.”

Our defense forces are continuously evaluating their limitations and giving training to reach an apt status. The war cannot be limited only to dispelling enemies from Tigray. The fingers that invaded Tigray must be cut. And so must the brains maneuvering these vexing fingers. So the youth and the people in general should continue their defense. We are prepared to continue our training and political discussions to reach a status where we both get rid of the enemies from Tigray soon and create a condition that enables the determination of Tigray’s future political status.