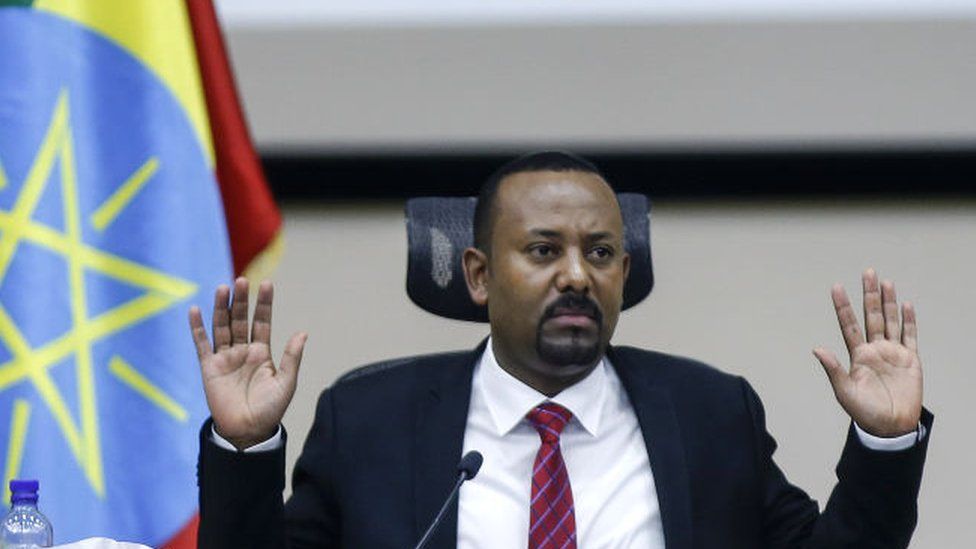 What a country Ethiopia could have been! With the coming to power of Abiy and his original agenda of peace and reconciliation in 2018, Ethiopia seemed to start afresh. When Abiy came to power, he planted seeds of hope in our hearts.

After his premiership and in his first visit to Tigray, he arrived to an elated welcome. Speaking in Tigrigna, he praised Tigray and the Tigray people for their sacrifices in creating a democratic Ethiopia. He celebrated Tigray as  the “epicenter of Ethiopia’s ancient civilization, philosophy, art, music, and religion” and continued to say that “It is impossible to think of Ethiopia without Tigray.”

I thought Abiy was the embodiment of Desmond Tutu and Nelson Mandela’s notion of Ubuntu. After his visit to Tigray, I was thinking of how Mandela bridged the rift between the black South Africans and the Afrikaners, although our difference in Ethiopia was not that much.

I couldn’t help but envision an Ethiopian version of John Carlin’s ‘playing the enemy’ and ‘Invictus’. Especially after his Nobel peace prize and his notion of ‘medemer’ (synergy), I thought Abiy was following the playbook of Mandela in dealing with the paradox of new and old; stability and change, of aspiration and fears. I thought he brought together those who were frustrated with the old way and those who were nervous about the new. I thought we were starting a new era of modern politics.

Boy, was I wrong!

The words of unity, peace, and reconciliation were so intoxicating that the majority joined the bandwagon into believing that Abiy was indeed the reformer – many considered him a God-sent messiah.

What fooled us and the world was the reforms that Abiy started. Opening up the political space, disarming militants, releasing political prisoners, calling those in exile to come back home, as well as opening up the platform for dissenting views.

Alas! All these reforms were short-lived. Most of the released political prisoners are now imprisoned on bogus charges; hundreds of thousands of dissenters are incarcerated; many media organizations are forcibly closed. The internet and telephone services are used to suppress dissenting views, there is a war on all fronts in Ethiopia, and many regions are operating under a state of emergency.

Abiy can talk, but…

After the honeymoon, one thing was evident: Abiy was not going to walk the talk. His promises were empty. While he preached peace and reconciliation, he had something else planned. It started sooner than expected when he tried to win over an audience by telling them what they wanted to hear.

Instead of starting with a clean slate, as promised, he started bringing in the past. But most regretfully, instead of continuing with his initial peace and reconciliation agenda, he started to ‘other’ past problems and fuel hostility between Tigrayans and the rest of the Ethiopians.

Soon, Abiy focused on naming and shaming a few TPLF leaders (which by implication was meant to target Tigrayans) for all past misdeeds (as if he or his party was not part of the problem) while taking credit for all the successes. What started as double-tongued rhetoric to gain support has ended in dramatically pitting Tigrayan against others particularly the Amhara and Eritreans.

In his open letter, Berhane Kidanemariam, the ex-deputy chief of mission in Washington, calls out Abiy’s duplicitous character as follows: “by using Amhara militias to attack Tigray, the government has tried to ensure further animosity between Amharas and Tigrayans. By involving Eritrea in this war and allowing its military to commit atrocities and wanton destruction of Tigray, the Prime Minister has deliberately tried to increase enmity between ordinary Tigrayans and Eritreans.” As he resigned from his post, Berhane concluded that the rift that Abiy has created will take generations to heal.

To begin with, befriending the dictator-for-life Isaias Afwerki who was waiting years for his revenge-based punishment on TPLF and the Tigray people was unsettling. Abiy knew that and was willing to be used as a tool to marginalize the Tigrayans and their leaders in the ‘new’ Ethiopia.

Knowing the animosity and what it meant to the people of Tigray and its leadership, rolling out a red carpet to Isaias, cutting ribbons of multiple factories and industrial parks built by the previous ‘rogue’ regime were angering many. This was, in fact, a deliberate act that he used to marginalize the people of Tigray and its leaders and part of the genocidal war Abiy and Isaias have waged.

There were many indications that Abiy was a fraud, but the recognitions he amassed (particularly the Nobel Peace Prize) were enough to fool many who won’t go beyond reading the headlines. He even dared to lecture Yemenis about the horror of war, while he was planning the same.

It was not difficult to see his shallow know-it-all attitude on many topics. His focus on frivolous and ostentatious projects that pleased his followers (amusement parks, planting trees, renovations, etc.) while there were critical issues that needed attending were early warnings.

It was evident from the photo-ops that he was obsessed with his image more than anything. His craving to be seen as an articulate genius has him plagiarize, during many of his appearances, a lot of notable people including Obama and Henry Kissinger. He even copied a random Ticktocker who claimed Ugandans are richer than Swedes because they buy their stuff cash, not on credit. Abiy said we (Ethiopians) measure poverty by their (the West’s) standard and that we are, in reality, better off. He really said that!

In what seems a delusional Don Quixote’s fantasy, he once said: in 30 years, Ethiopia will be among the three superpowers in the world. He once told his cabinet that his mother told him that he would be the 7th king of Ethiopia when he was seven. Since then, he said, everything he does, it was to realize that dream of being a King, a reason for his Machiavellian way of governing: to stay in power by any means necessary.

In a leaked video with African leaders, he said that it rained when he stepped out of his plane (a similar myth associated with Haile Selassie during his visit to Jamaica). He also claimed, while the rest of the world’s economy was severely hit by the COVID-19 pandemic, Ethiopia was the only economy that grew regardless. I am not sure if this is a delusion disorder, naïveté, or just utter stupidity!

Regardless of what Abiy and his minions would have us believe, regardless of the transcendence narrative that is recklessly flaunted, under Abiy, Ethiopia has become a mess. His myopic and thoughtless acts have inflicted havoc upon the county. It was astonishing to see Abiy and his followers lavishly celebrate his third year as premier when appalling atrocities were being reported right and left.

The fact is, Abiy’s three years were nothing but nightmarish on many grounds; his record card does not seem to call for a celebration. Given the death of tens of thousands; millions displaced; millions on the brink of starvation; hundreds of thousands incarcerated; countless ethnic-based violence and conflicts all over the country, a wrecked economy with increasing poverty and inflation, I was not sure what was being celebrated.

More specifically, the war in Tigray has shown us countless inhuman acts under Abiy’s watch. So, whether Abiy likes it not, his legacy will not be of progress and change, it will be of the hundreds of massacres, the weaponized starvations, and sexual violence; the displacement of millions, and the deliberate destruction of infrastructures worth billions. The amusement parks he has built, the many foundation stones he has laid, or the plants he has watered will not sanitize the deep wounds he has inflicted on the Tigray people for generations.

Given his focus on image building and legacy before doing the actual work, it was easy to see how Abiy was utterly blind to his blindness.

Although we all knew how he was preparing for war, he was adamant to make people believe that TPLF started the war. Abiy and his minion’s playbook was exhausting us all with the same lie knowing full well that they cannot convince us. After preparing for the war for more than three years (his own Generals and the MOFA later admitted that they were all preparing for war, they even admitted how they requested the help of Sudan to guard the border) he was hoping for an operation for the books that glorify his military brilliance and leadership.

Five months in, we are still in war (or as he calls it, a ‘law enforcement operation’). The war on Tigray has also shown us how Abiy is a pathological liar. His lies intensified during the war. Although he insisted that what he started was a ‘law enforcement operation’ and that he was after few TPLF leaders, his true intention of subjugating Tigrayans was becoming clearer as days went by. Among his lies which were consequential include:

●   The EDF completed the operation with zero causality (at that time there was no way of knowing given that he restricted internet and telephone services and physically sealed off the whole region, we now know that was a total lie.)

●   There is no Eritrean army in Ethiopia (he and his Generals lied by saying those in Eritreans uniforms were actually Ethiopian soldiers who ran away to Eritrea when TPLF allegedly ambushed the Northern Command). Even with evidence of their presence and accounts of atrocities reported by the likes of Amnesty, he stuck with the lie and denied what is hard to deny – fact. After strong pressure, including from the US and EU, he admitted that the Eritrean army was involved from the get-go.

In their attempt to control the narrative, Abiy’s and his PR team’s face-work was embarrassing to watch as they even tried to manipulate his discussions with world leaders, who were concerned by the reports of atrocities, by misrepresenting the key talking points. This happened when the world could see what the other leaders had posted on their official Twitter accounts and press releases.

Even after the news of atrocities and human rights abuses started coming out of Tigray, to give the world the semblance of normalcy, he started the #Ethiopiaprevails campaign which lost momentum in a matter of a few days. Abiy has been using mega projects to divert attention from hard issues, engaging in face-work to cover what is difficult to cover: people’s misery. Well, it is not easy to quiet the disquiet!

So, for those who claim that Abiy is a reformer, I say he is a war criminal; a delusional hypocrite; and a pathological liar. Most of all a failed leader.

Undoubtedly, Abiy cannot, regardless of how much he craves his kingship, be part of a democratic Ethiopia – he has ruined it.

A graphic footage of the Debre Abay massacre: What do we know about it?