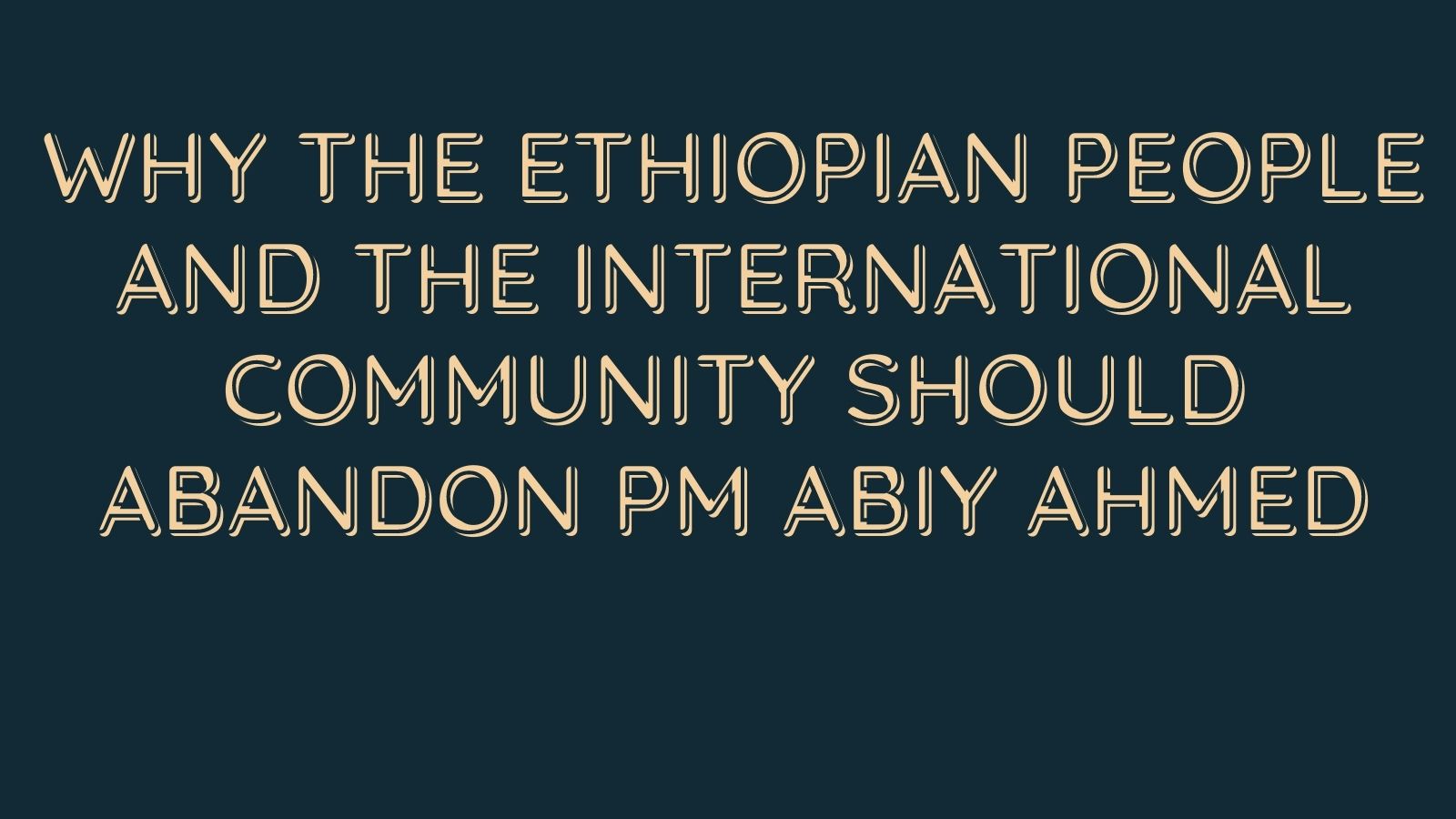 Exactly one year since the start of the war in Tigray and more than three years into his tenure as Prime Minister of Ethiopia, the entire world has a much better insight into the character of Abiy Ahmed. The fever of “Abiymania,” which described the hope and enthusiasm for a promised new era that had characterized his first months, and the international support that resulted in him winning the Nobel Prize fizzled out and disappeared completely in the last year as the Nobel Peace Prize winner led the second-most populous country in Africa down the road to brutal civil war.

What has been revealed, without mincing words, is that Prime Minister Abiy Ahmed is a megalomaniac and a pathological liar. Deceit is the primary tool in his toolbox. Over the past year, he has repeatedly lied about the Tigray war. With the international community’s response mostly characterized by lip service, inaction, and a barrage of statements of concern, the deceit successfully bought him time. Now that Tigrayan and Oromo forces are fast approaching Addis Ababa and he is running out of time, Abiy is turning to incite violence against Tigrayan civilians.

Facebook’s recent removal of a post by Abiy seems to be a recognition of the danger Abiy’s incitement of hate and violence poses. The Ethiopian people and the international community must follow suit by rejecting and abandoning the sinking ship that is Abiy Ahmed’s premiership, which has been characterized by lies, more lies, failure, and bloodshed.

Abiy cannot be trusted. Given my response to Abiy’s February 2021 op-ed on Project Syndicate debunking five of his lies, I will only highlight the lies he has told since the Ethiopian National Defense Force (ENDF) left Tigray’s regional capital Mekelle, focusing on military decisions related to the war. In June 2021, The New York Times published a detailed report on how Tigrayan fighters routed Ethiopia’s army. Over six thousand prisoners of war (POW) were seen marching through Tigray to a prison in Mekelle. Tigrayan leaders claimed the ENDF had collapsed. The fact that the ENDF suffered a huge defeat in Tigray could not be disputed.

On its way out of Mekelle, Abiy’s government told a different story. First, it hurriedly declared a unilateral ceasefire, announcing that ENDF withdrew to “enable farmers to till their land.” They claimed the photos showing ENDF POW were, I quote, “photoshopped.” Shortly thereafter, Abiy told an audience of journalists that ENDF withdrew from Tigray because the people of Tigray had betrayed ENDF, and he wanted to give the people of Tigray time to reflect on their actions. In the same speech, Abiy proudly stated that he had paralyzed Tigray from being able to mount resistance by reducing the regional capital Mekelle, its economic center, to the level of his hometown Beshasha. For context, Mekelle’s population is 166 times larger than Beshahsa. “We could re-enter Mekelle in two weeks if we want,” he said. He also boasted, “I could easily recruit one million new fighters.”  This was just four months ago.

The restored Tigray government offered a set of preconditions for a ceasefire and negotiation with Abiy’s government, one of which was unfettered humanitarian access. Abiy’s government refused to negotiate with what it had dubbed a terrorist group. Instead, it repeatedly demanded that Tigrayan forces accept the government’s unilateral ceasefire while it continued to use starvation as a weapon of war. In a July statement translated here, Abiy Ahmed promised that the ENDF had prepared for a mission that would leave Ethiopians astonished with “their hands over their mouths.”

As the Tigray Defense Force advanced into the Amhara and Afar regions, Abiy issued a call in August 2021 for “all eligible civilians to join the armed forces.”  Getachew Reda, TPLF spokesperson, repeatedly implored the Ethiopian people to inquire why Abiy would need to issue a call for civilians if the ENDF had not collapsed, and stated that the Tigray Defense Force would continue its advance to break the siege and man-made famine that has affected millions of Tigrayans.

The megalomaniac Abiy insisted on a military solution. While visiting ENDF soldiers on the May Tsemri front for the 2014 Ethiopian New Year celebrations on September 11, he commended the soldiers for their military miracles during the Tigray war and boasted that Ethiopia is now building a first-of-its-kind military, the best in a hundred years. He added, referring to the Tigray Defense Force, “today’s bandits are our target practice. We will make them our training ground. We will then use this training to build a strong military. No one will dare to touch Ethiopia.”

At the same time, Abiy shopped around for military armaments and drones. Reports by aircraft tracker @Gerjon_  on Twitter indicated that frequent military shipments arrived in Ethiopia from different places, including Iran, China, UAE, and Turkey. On October 22, @Gerjon_ reported that he had identified 75 cargo flights from UAE and Iran over the previous 69 days. In early October, western officials confirmed that Abiy’s government had launched a new offensive on Tigrayan forces. A fresh round of government airstrikes targeted cities and towns in Tigray hitting public and civilian infrastructure like Mesfin Industrial Engineering in Mekelle and Alemda Textile Factory in Adwa, as well as a market, homes, and crops. That did not stop Tigrayan forces from continuing their advance, seizing Dessie and Kombolcha, and now joining hands with the Oromo Liberation Army in Kemisse on their way to Addis Ababa.

Repeated lies could no longer keep Abiy’s military defeats hidden. The only tool now left in Abiy’s wartime toolbox is inciting violence against all Tigrayans. Instead of accepting defeat and suing for peace, Abiy is now blaming the Tigray Defense Force’s successful capture of cities on Tigrayan residents of the captured cities. His government has declared a state of emergency and urged citizens to fight Tigrayan forces with any weapon. Given his continuous portrayal of Tigrayans as a threat to Ethiopia’s existence, the state of emergency makes any Tigrayan a target for genocidal forces. This last resort turn could serve two purposes for Abiy’s government: to use Tigrayan civilians as a bargaining chip by turning the security apparatus and their neighbors against them and to use other civilians in Addis Ababa as cannon fodder with the hope that a lengthy war could weaken Tigrayan forces, as he indicated in his address to his cabinet earlier this week. Both of these are irresponsible, devoid of wisdom, and can only lead to a violent breakup of the country.

To the Ethiopian People,

He has repeatedly lied to you. He told you that it was not war but a law enforcement operation. He told you it would be completed in days. He told you that it was completed in less than three weeks. He condescendingly dismissed the knowledge of Tigrayan military leaders, saying that they were both mentally and physically old and used outdated war strategies. He boasted that TPLF was scattered like flour. He said that he could return to Mekelle in two weeks if he wanted. He said he could easily recruit millions of new fighters. He said that he is building a first-of-its-kind military in a hundred years. In the end, and after all that lying, the war has now reached Addis, and Abiy has declared a national state of emergency. I ask:

To the International Community,

An attempt to save a despotic regime with blatant disregard for international humanitarian and human rights law – with the unflinching determination to starve millions of people – is a personal affront to every Tigrayan, and it should be a personal affront to any human being. A deceitful leader who has lost the trust of millions of people in Ethiopia and the diplomatic world is not fit for lifting the Ethiopian people out of this civil war. His recent escalation and incitement of violence are likely to lead to further bloodshed and a violent breakup of the country, likely resulting in mass migration. He has refused to take reasonable and rational counsel and continued on a path of catastrophe that has brought an entire country to the brink. It’s time to say no more and not come to the rescue. Instead, facilitate the establishment of a transitional government and the start of an all-inclusive national dialogue. The alternative is having to deal with the repercussions of a failed state with a population of over 110 million people.

Bruck writes solely to be a voice for Tigrayan voices silenced due to the internet blackout in Tigray and targeted ethnic profiling in the rest of Ethiopia. Opinions expressed are solely his own and do not express the views or opinions of his educational institutions or his employers.