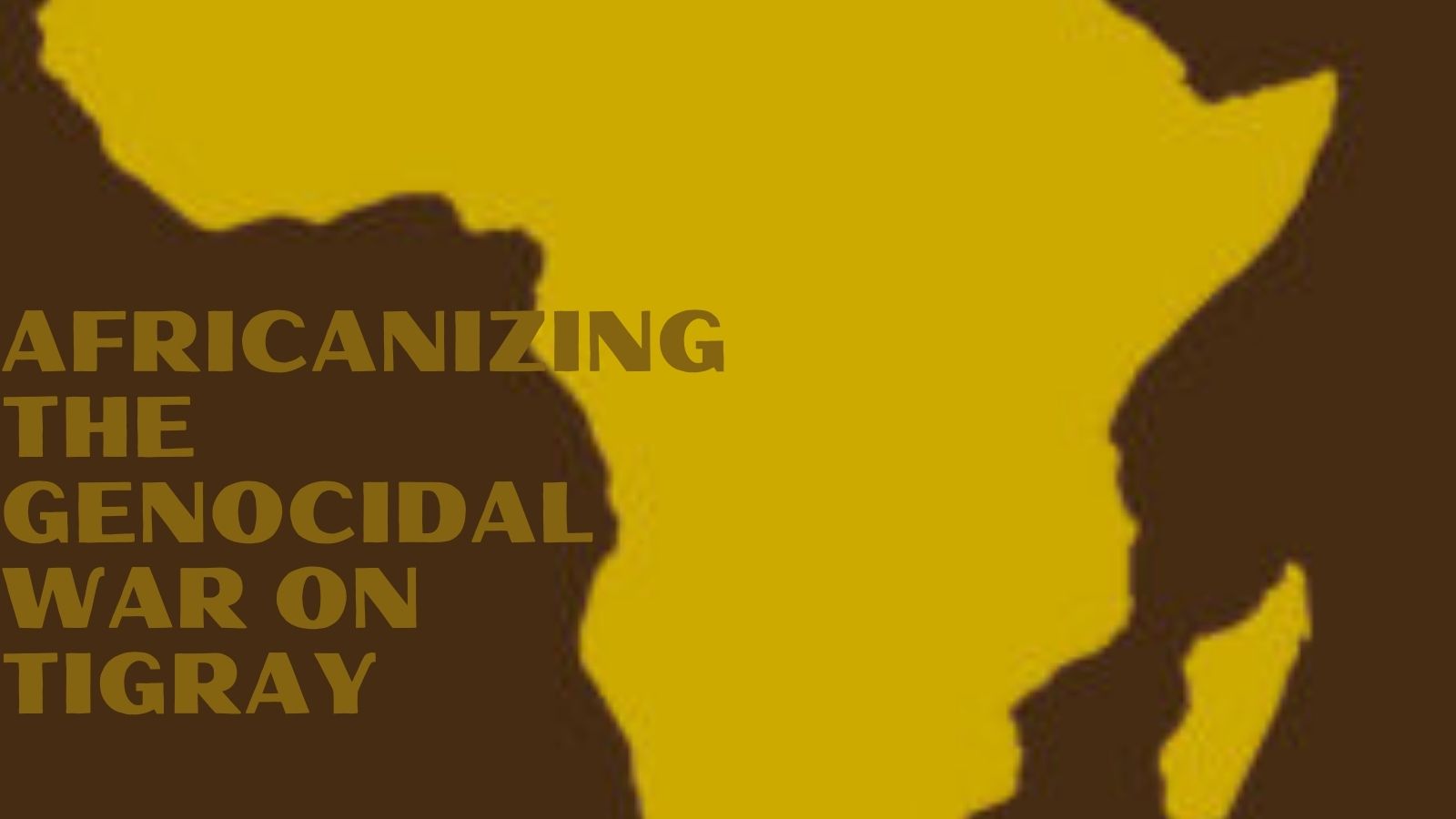 One year into the genocidal war waged on Tigray by the joint Ethiopian, Eritrean, and Amhara regional forces, with the support of other foreign powers; the people of Tigray are under complete humanitarian siege. And despite all the significant diplomatic engagements, international calls, and condemnations of the Ethiopian and Eritrean officials as well as the Amhara regional government, there have been no meaningful targeted actions taken to end the war on Tigray, facilitate unfettered humanitarian access to address the man-made famine,  ensure the withdrawal of Eritrean troops and Amhara militia from Tigray, or a mechanism for a peaceful resolution to the political crisis underlying the conflict.

A key feature of this war has been the persistent quest by the Ethiopian regime to set a narrative that suits it and silence or distort the reality of the war in any way it can. To this end, the initial narrative used by the Abiy regime to wage the genocidal war on Tigray was the pretext of a precise ‘law enforcement operation’. As a result of a miscalculation by the regime in exaggerating its capability and underestimating the resilience and fierce opposition to subjugation of the Tigrayan people, however, the Ethiopian National Defense force and its allied forces were routed by the Tigray Defense Forces from most parts of Tigray, including from Mekelle on 28 June 2021.

Since that time, despite the declaration of  ‘‘final major offensive operations’’ by the Abiy regime, the Tigray Defense Forces has strengthened its defensive capabilities and strategic position by launching successive counter-offensives. Following its resounding defeat at the hands of the Tigray Defense Forces coupled with the formation of an alliance with the Oromo Liberation Army and allied forces, the Abiy regime is now busy searching for a bigger enemy that can be a scapegoat for its humiliating defeat. To this end Abiy and his supporters have deployed the narrative of an  ‘‘African war’’ through mischaracterizing the parties to the conflict, twisting historical anecdotes, and misrepresenting the systemic legitimacy crisis and the irreconcilable aspirations of the state that led to the genocidal war.

Quest in Search of a Bigger Enemy

Since Abiy ascended to power through backdoor negotiations, he has been portrayed by the international community as a poster child for political and other reforms. Without a single meaningful deliverable or a clear political roadmap of transitioning the country, Abiy was given unqualified trust most notably demonstrated in his being awarded the Nobel Peace Prize, which he eventually exploited as a blank cheque to wage a genocidal war on Tigray. The political and economic prescriptions coming from the same entities now employed as a scapegoat were unconditionally implemented. Without any exaggeration, the sovereignty and policy space of Ethiopia were rented in exchange for an imported legitimacy. The so-called homegrown economic reform that auctioned the precious assets of the country, the signing of the Ethio-Eritrea Peace Accord in the Kingdom of Saudi Arabia disregarding the African Union, the manner in which the Grand Ethiopian Renaissance Dam negotiation was taken from its Tripartite framework to a US -World Bank-led negotiation are some of the many practical examples of how national interest and Pan-African diplomacy were disregarded to curry favor from Western countries and institutions.

As a way of reciprocating for Abiy handing over Ethiopia’s sovereignty, the international community looked away from the disastrous war launched by the Ethiopian regime and legitimized the narrative that what was unfolding was a law enforcement operation and strictly an internal affair. And for extended parts of the last one year of the war, despite calls for unhindered humanitarian access and the protection of human rights, the general approach of the international community has been to blame all the parties to the conflict without any regard to their level of participation and level of accountability; at times to an extent that was almost tantamount to suggesting that the dead were as much to blame for their death as their killers.

The current futile attempt by the regime to blame the very international community that has tolerated the irresponsible actions that should have been subject to serious scrutiny and targeted actions is, therefore, a very obvious attempt to save face from the humiliating defeat at the hands of a force that the Prime Minister himself had once likened to ‘‘flour in the wind’’.

Honoring the Past by Denying the Present

All the parties to the conflict being African actors one may wonder why the Abiy regime is toiling to create an alternative reality out of thin air, whereby it depicts itself as facing a non-African force and thus in need of African support. The underlying reasons for the regime being busy distorting historical narratives, misrepresenting the parties to the conflict, and attempting to exploit African solidarity is undoubtedly a quest for a ‘bigger enemy’, as the last arrow before its demise.

A key element at the core of the historical distortion, in particular, lies the interpretation of the battle of Adwa and post Adwa political order. As part of the complex political history of the Ethiopian empire, the battle of Adwa has been problematically deployed both for internal and external consumption.

Internally, Adwa is an instrument of nostalgia glorifying a controversial past and masking the irreconcilable basic contradictions of the Empire. It is not an overstatement that countries like Ethiopia, obsessed with ultra-national pride, live in past glories but are desperate about the future. Such political entities have less hope in their common future and invariably look for a pretext to commit atrocities against their people and launch aggression, for the sole purpose of either creating a monolithic national image to the liking of the political elites or using the crisis as a unifying factor to sustain the life of a regime, as Abiy is seeking to do in relation to the genocidal war on Tigray.

Externally, Adwa, as a victory against a European colonial power, is deployed as a unifying talisman relevant to all Africans and people of African descent. However, even the accounts of the Ethiopian far-right Bahru Zewde, notes that the victory of Adwa was not the spark that ignited the fire of anti-colonialism in Africa. Marxist-inspired revolutions and nationalist uprisings elsewhere had more impact on anti-colonial struggles in Africa than the victory of Adwa. Indeed, those self-same far-right Ethiopianists who want to use Adwa as a pan African symbol are of the conviction that they are neither Africans nor black. An integral political myth of the Ethiopian Empire is the claim that the ruling elite is descendants of Israeli emigrants thus disassociating from African descent. Surprisingly, the same expansionist elites that claim Eritrea was part of the empire and was handed over Eritrea to Italy in the Treaty of Wuchale and subsequently reaffirmed in the 1896 Treaty of Addis Ababa also, paradoxically, wish to claim Ethiopia was never colonized as if there is a thing called ‘divisible sovereignty’.

In conclusion, the Abiy regime’s attempt at mobilizing African solidarity, in support of the genocidal war it is waging against the people of Tigray and Ethiopians of Tigrayan ethnicity in all parts of the country for more than one year, is nothing but a diversion from its inevitable demise. It is neither out of conviction for Pan African ideals nor out of subscription to the concept of sovereignty.

Hence, unless enabling genocide is a new Pan African value, African sisters and brothers should refrain from giving support to salvage an unredeemable genocidal regime, condemn the atrocities and acts of genocide committed by the Ethiopian regime and its allies, equally recognize all parties to the conflict as African brethren, leave the legitimacy question to the domestic stakeholders, limit their levels of engagement until a legitimate government is established through an all-inclusive transitional arrangement.